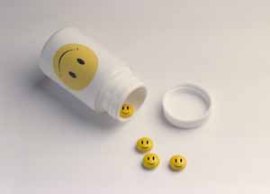 Chiron and Neptune have been within range of a conjunction since early 2008, but the conjunction won’t be exact until next summer.  Still, the Wounded Healer and the Mystic Escapist are definitely dancing together, which may be how we ended up with this:

Scientists believe a common heart medicine may be able to banish fearful memories from the mind.

The Dutch investigators believe beta-blocker drugs could help people suffering from the emotional after-effects of traumatic experiences.Tieve the drug alters how memories are recalled after carrying out the study of 60 people, Nature Neuroscience reports.
But British experts questioned the ethics of tampering with the mind.
Paul Farmer, chief executive of mental health charity Mind, said he was concerned about the “fundamentally pharmacological” approach to people with problems such as phobias and anxiety. He said the procedure might also alter good memories and warned against an “accelerated Alzheimer’s” approach….
Experiments on animals has shown beta blockers can interfere with how the brain makes sense of frightening events.
She told Nature Neuroscience: “Millions of people suffer from emotional disorders and the relapse of fear, even after successful treatment.
“Our findings may have important implications for the understanding and treatment of persistent and self-perpetuating memories in individuals suffering from emotional disorders.”
But Professor Neil Burgess of the Institute of Cognitive Neuroscience said the research merely demonstrates that the beta blockers reduce a person’s startle response, breaking the association of the spider to these unconscious responses.
And Dr Daniel Sokol, lecturer in Medical Ethics at St George’s, University of London, saidmemories were important, for people to learn from their mistakes for example [emphasis added].

“Removing bad memories is not like removing a wart or a mole. It will change our personal identity since who we are is linked to our memories. It may perhaps be beneficial in some cases, but before eradicating memories, we must reflect on the knock-on effects that this will have on individuals, society and our sense of humanity.”

I’ve written on this subject before, particularly here and here.  The fascinating thing about reading an astrological chart is that you can see the difficult traumas and abuse right there in the chart, meaning that individual was born with a predisposition to these events.  Rather than “bad karma,” this is, I believe, a conscious choice on the part of the soul to work through difficult challenges and emerge a stronger and more incredible human.  I believe this because it has been my own personal experience.

Working through bad memories is what Chiron is all about, and Neptune has the tendency either to want to sublimate bad memories through escapism, or to embrace it as part of the spirituality of life.  If we take the first path, we will end up with an unresolved life and without the benefits of having worked through the pain of our past. Chiron has been in Aquarius for several years now, and we have seen an associated explosion of modalities that utilize energy (Aquarius) healing (Chiron).   With Chiron and Neptune both in Aquarius, sign of technological advancement as well as energy, it’s not surprising that some are turning to pharmaceuticals for an easy way out.