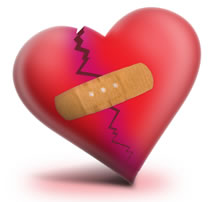 This came as no surprise to me, but it’s interesting to see an article like this in the Wall Street Journal:

Dorothy Lee and her husband of 40 years were driving home from a Bible study group one wintry night when their car suddenly hit the curb. Mrs. Lee looked at her husband, who was driving, and saw his head bob a couple of times and fall on his chest.

In the ensuing minutes, Mrs. Lee recalls, she managed to avoid a crash while stopping the car, called 911 on her cellphone and tried to revive her husband before an ambulance arrived. But at the hospital, soon after learning her husband had died of a heart attack, Mrs. Lee’s heart appeared to give out as well. She experienced sudden sharp pains in her chest, felt faint and went unconscious.

When doctors performed an X-ray angiogram expecting to find and treat a blood clot that had caused Mrs. Lee’s symptoms, they were surprised: There wasn’t any evidence of a heart attack. Her coronary arteries were completely clear.

Doctors eventually determined that Mrs. Lee had suffered from broken-heart syndrome, a name given by doctors who observed that it seemed to especially affect patients who had recently lost a spouse or other family member. The mysterious malady mimics heart attacks, but appears to have little connection with coronary artery disease. Instead, it is typically triggered by acute emotion or physical trauma that releases a surge of adrenaline that overwhelms the heart.