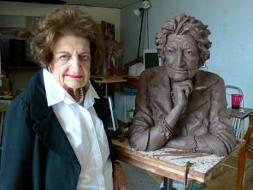 The retirement of Helen Thomas, the veteran doyenne of the White House press room, was announced by her employer the Hearst corporation after remarks she made at a White House event.  Thomas, of Lebanese descent, told a rabbi at this event that Jews should “get the hell out of Israel and go back to Germany and Poland.”

Thomas, nearly 90 (August 4, 1920, time unknown) has been widely admired for her aggressively relentless  questioning in the White House press room since 1960 when she covered President Kennedy.

Helen Thomas has the Sun in Leo, which is very much a showman, and it is in a nearly exact square to Mars, the planet of aggression and drive.  In addition, her Moon is in Aries, the sign ruled by Mars, suggesting an emotional need (Moon) to assert herself strongly (Mars) in all situations.

With four planets in Leo, a fire sign, with her Sun square Mars, the fire planet, and her Moon in Aries, another fire sign ruled by the fire planet – Helen Thomas is full of fire.  This gives her energy, passion and courage, but also brings a potential lack of sensitivity and empathy.

CBS correspondent Mark Knoller said of her “”As a columnist she felt totally unbound from any of the normal policies of objectivity that every other reporter in the room felt compelled to abide by, and sometimes her questions were embarrassing to other reporters.”  Personally, I cheered for Helen Thomas when she said openly that George W Bush was the worst president in American history.  She was hated for her aggressive ideology, but she was loved and admired for it as well.

My readers know that I am no apologist for Israel, but as someone whose relatives were murdered by the Nazis in Poland I consider these remarks to be the pinnacle of stupidity and ignorance.  So what came over Helen Thomas to throw away her exceptional legacy over these thoughtless remarks?

We don’t know the exact degree of Thomas’s Moon, but it is in the very early degrees of Aries and Uranus and Jupiter, both about to enter the sign of Aries on May 27 when the incident occurred, would have been approaching a conjunction to her Moon.  Jupiter and Uranus give us a craving for freedom – to say and do exactly what we want.  At the same time, transiting Mars was in the later degrees of Leo, having passed over all of Thomas’s Leo planets and landing right on her Jupiter at the time of the incident.  Mars transits are fleeting and occur every six months or so but the combination of the Mars transits with  the effect of Jupiter and Uranus would have excited Thomas’s natural aggression even more.

I have discovered that one of the beautiful things about aging is that every year you become more yourself, and care less about what others think.  I can only imagine that by the time you’re 90 the opinions of others is rather far down on your list of priorities.  Still, when you’re in the public eye with a legacy to consider you can’t forget about others entirely.

The planets didn’t cause Helen Thomas to end her career in scandal, but the liberating force of Jupiter and Uranus may have encouraged the loosening of the tongue that dealt the final blow.