Howard Dean is Stepping Down

Howard Dean is Stepping Down 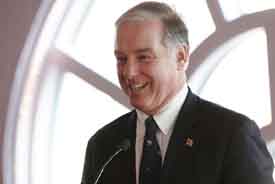 Howard Dean announced today that he will be stepping down as DNC chair when his term is up. It was Dean’s 50-state strategy that helped propel Barack Obama’s Dream Team over the top but also caused frayed relations with the party hacks that rule over the Old Democratic Party.

Fortunately, we have an accurate birth time for Howard Dean giving us good solid astrological information.  I wrote a profile of Howard Dean nearly three years ago:

Howard Dean has a Scorpio Sun, accounting for his intensity and passion. Scorpios don’t do anything halfway, and they are the most emotionally courageous of all the signs. They don’t shrink from what must be done, yet they can be somewhat manipulative as well. But Dean’s Cancer ascendant (rising sign), while still emotional, softens the Scorpio edge and gives him the need to nurture others, and Chiron (the wounded healer) conjuncts his Sun, a placement commonly found in the charts of healers of all types, including medical professionals such as Dean.

With Mercury (communication) also in intense Scorpio and in conflict (square) with Pluto, indicating intensity and a bit of compulsion, he is known for his blunt tongue and often finds his foot in his mouth. However, his Gemini moon desires to communicate and be understood, and rather than fall back in failure he continues to come out and speak for the Democratic party. Saturn (isolation) squares his Sun (spirit), a placement which is very difficult for the young person and often causes shyness and insecurity. However, difficult Saturn placements teach strength and create stability that usually can be seen after the age of 40. This Saturn/Sun square does make Dean a bit of a loner, not a bad thing in today’s political climate of cronyism and corruption.

Mars in Dean’s chart falls in freedom-loving Sagittarius, showing he loves adventure and travel, and it trines Pluto, giving him a great deal of personal (Mars) power (Pluto) and the ability to achieve his desires. Mars does oppose rebellious Uranus so he will never really follow the rules of others.

Dean also has a nearly exact opposition between Jupiter and Uranus which is very independent and can be rebellious, and transiting Pluto has been transiting these points over the past couple of years.  Transits of Pluto bring change and an urge to amass greater personal power, and it’s not surprising that under this influence Howard Dean has bucked the party establishment to create a new party that’s more of a grassroots organization than an organization that makes deals in smoky backrooms.

Transiting Jupiter has been making harmonious transits to the Midheaven in Dean’s chart, providing opportunities for him in the career front and liberating him from work that doesn’t fulfill his ultimate goals.  Transiting Saturn has just begun a cycle of challenging transits to that same point that will create some roadblocks for him that will frustate his ability to pursue those goals.  At the same time, the transit of Pluto (transformation) to Jupiter (expansion and confidence) in his chart which began this year is feeding his desire for more and more recognition and power.

Rahm Emanuel, Obama’s new chief of staff, and Howard Dean have a well-known enmity between them, so the timing of Dean’s stepping down right after the announcement of Emanuel’s appointment fits in nicely with the astrological cycles happening for Dean right now.

I predict that the next year will see some big changes from the former Governor of Vermont.  I hope that we have not seen the last of him in the political world.