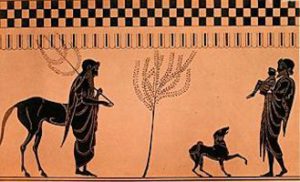 Chiron, originally given the very temporary title “Slow-Moving Object Kowal”, was given the provisional minor planet designation 1977 UB. Later it was given the permanent minor planet number and name (2060) Chiron. All along, there were discussions it might be a comet, and definite cometary activity was noticed, at least some of the time, beginning around 1988. The change in the comet-designation system introduced at the beginning of 1995 (and applicable in retrospect), allowed us to modify the provisional designation to P/1977 UB, P/ indicating that it is a short-period comet. This set the scene for giving it a permanent short-period comet number, 95P, which can be combined with the name to give 95P/Chiron. This is probably what it is best called. However, since it WAS previously given a PERMANENT minor-planet number, it ALSO retains the number (2060). So the object is permanently classified as BOTH a comet and a minor planet. There is really no conflict with this. For astrometric purposes and most orbital purposes we continue to call it (2060) Chiron and classify it with the minor planets. For some orbital purposes it can also be 95P/Chiron. For physical purposes the observer can choose which he or she feels is more appropriate. Pholus and the other centaurs have not shown cometary behavior, so they remain only in the minor-planet category. “

To me this is significant, because although Chiron in mythology was half horse and half man, he was NOT one of the Centaurs, a race of hybrid horse-men from Mount Pelion in Greece that were renowned for their brutality and drunken rampages.  This is a far cry from the noble suffering of Chiron, whose hybridization occurred because his mother asked Hera to turn her into a mare in a vain attempt to escape the amorous advances of the god Saturn.  Unlike the Centaur race, Chiron was half mortal and half immortal, and became famous for his gifts as a healer, musician and teacher.

In both astronomy and mythology, Chiron is a hybrid creature.  In astrology, Chiron encourages us to greater awareness of our own hybridization as both a physical creature and a metaphysical one.