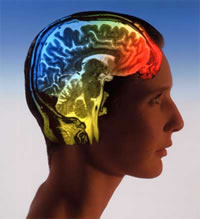 Scientists seem to be very fond of attempting to relegate esoteric experiences of consciousness to the physical brain.  In 2009 researchers claimed to have discovered the physical location of god in the brain.  This NPR story shows a diagram of the brain showing the source of different components of spiritual experiences and identifying the temporal lobe, the location for emotion and memory, as the “God Spot”: the source of transcendent experiences and comparing these to epileptic seizures. These ideas fascinate me as an astrologer because of the correlation to the different astrological aspects of religious and spiritual belief.  For example, a 2009 article in the UK’s Independent tells us:

The latest study, published in the journal Proceedings of the National Academy of Sciences, involved analysing the brains of volunteers, who had been asked to think about religious and moral problems and questions. For the analysis, the researchers used a functional magnetic-resonance imaging machine, which can identify the most energetically-active regions of the brain.   They found that people of different religious persuasions and beliefs, as well as atheists, all tended to use the same electrical circuits in the brain to solve a perceived moral conundrum – and the same circuits were used when religiously-inclined people dealt with issues related to God.

The astrological Jupiter and its sign Sagittarius are said to rule both religion and morality as well as philosophy and ideology – mental constructs with which we define our reality.  So it makes sense that the same area of the brain would be used for all of these kinds of experiences. The author clearly misses the point, however, in this statement:

Other studies of people taking part in Buddhist meditation suggested the parietal lobes at the upper back region of the brain were involved in controlling religious belief, in particular the mystical elements that gave people a feeling of being on a higher plane during prayer.

Religious belief, ruled by Jupiter and Sagittarius, are totally different experiences from the “mystical elements” such as a sense of elevated consciousness.  These experiences of transcendence and mysticism are ruled by Neptune and Pisces and are completely different in nature astrologically. New research by Professor Brick Johnstone of Missouri University has found scientific basis for the fact that “spirituality is a complex phenomenon and that multiple areas of the brain are responsible for the many aspects of spiritual experiences.”

In the most recent study, Johnstone studied 20 people with traumatic brain injuries affecting the right parietal lobe, the area of the brain situated a few inches above the right ear. He surveyed participants on characteristics of spirituality, such as how close they felt to a higher power and if they felt their lives were part of a divine plan. He found that the participants with more significant injury to their right parietal lobe showed an increased feeling of closeness to a higher power. ‘Neuropsychology researchers consistently have shown that impairment on the right side of the brain decreases one’s focus on the self,’ said Johnstone. ‘Since our research shows that people with this impairment are more spiritual, this suggests spiritual experiences are associated with a decreased focus on the self.

The planet Neptune and the sign Pisces correlate to experiences that take us beyond the Self.  These are the experiences in which we feel personally connected to an experience of the Divine rather than a belief. Johnston also found a correlation between frontal lobe activity and frequency of religious practice (i.e., how often one attends church) which would be a more Jupiter/Sagittarius experience.  ‘This finding indicates that spiritual experiences are likely associated with different parts of the brain,” said Johnstone. My personal belief is that the theological experiences governed by Jupiter and Sagittarius are brain-based.  This is where we construct our theory of the reality of our world and create the resultant belief systems.  The more mystical experiences of being connected to a higher power, or experiences that go beyond the individual self, originate in consciousness which, scientists are finding, is not localized in the brain at all.  These Neptune/Pisces experiences are then processed through the brain to help us to understand those experiences in a way that will help our personal evolution and inner knowledge. In any case, any research that helps people to understand that there is not one True Way is always helpful.