It’s the Year of the Ox!

It’s the Year of the Ox! 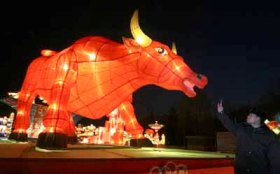 The Chinese New Year occurred at the time of the New Moon and the eclipse, ushering us into the Year of the Ox.  I confess I don’t know much… well really, anything about Chinese astrology except that I am supposedly a dragon which I always thought sounded cool.

At any rate, this is the year of the Ox, which seems to have some similarities with the sign of Taurus and its symbol the Bull.  Wikipedia says that the Ox is the sign of prosperity through hard work and perseverance, which sounds rather like Capricorn.  Over the past fifteen years as Pluto traveled through Sagittarius, we have wanted our prosperity to come easily and quickly.  Pluto’s entry into the hard working sign of Capricorn would rather we base our prosperity on something real and lasting.

Evidently some Chinese astrologers predict difficulties for President Barack Obama, who was born under the Ox sign, saying that when an Ox faces the Ox energy in an Ox year, he can face resistance.  I actually don’t think you have to be an astrologer to make that prediction!!