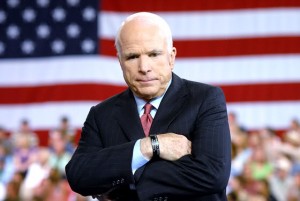 Please note: After this article was written a birth certificate for John McCain was located showing that he has Pisces rising, not Libra. John McCain very badly wants to be president. He wants to be president so badly that he is willing to suck up to the very people who trashed his family in the last election, leading whisper campaigns that his wife was crazy and that he had an illegitimate black daughter (referring to his adopted daughter from Bangladesh). He wants to be president so badly that he has recreated his previous image as an independent maverick who thinks for himself (in 2001 he was one of only two Republican senators to vote against the tax cuts but recently voted to extend them). Now he has agreed to give the commencement address at Jerry Falwell’s Liberty University even though previously he had denounced Falwell as an “evil influence.”

John McCain works hard to maintain his image as a consensus builder. With Libra rising, and Mercury in Libra, the sign of balance and relationships, he struggles between his need to please others (Libra) and his Virgo sun which strives for authenticity and perfection. Virgos dislike the flattery and superficiality required to negotiate and capitulate; they tend to avoid the spotlight and prefer a quiet corner where they can utilize their famous discrimination to continually perfect themselves and their work.

Mr. McCain has Saturn retrograde, a placement that causes Saturn’s critical voice to turn inward. Individuals with this placement tend to be insecure and more dependent on the approval of others than they might otherwise be. Saturn opposes his Venus, demonstrating that he doubts his ability to really relate to others. With his Venus in Virgo, he may be secretly critical of those he must deal with from day to day despite his Libra rising need to placate and cajole to maintain alliances.

McCain has a Grand Cross in the “mutable” signs (Sagittarius, Virgo, Pisces, Gemini). The astrological signs have three different “qualities”: Cardinal, offering leadership and action; Fixed, offering stability and organization; and Mutable, offering flexibility and adaptation. A Grand Cross is a challenging aspect in which four planets make 90 degrees to each other, with two pairs of planets in opposition to each other. Typically there is a buildup of tension with this configuration which promotes change and transformation within the individual, but with the Mutable Grand Cross this energy is never focused and tends to create distress and tension within the individual unless there is a motivating force that provides momentum. Without such a force this person will tend to waffle and become distracted. At his core, Mr. McCain has not yet resolved his inner sense of failure expressed through his retrograde Saturn and is well known for his apologetic tendencies.

Mars in this chart is in Leo, a fiery and dramatic expression of aggression, and is square Uranus, the revolutionary. McCain’s Virgo Sun and Libra ascendant (rising sign) and Mercury will do their best to suppress his anger, making its eruption all the more dramatic when it occurs. This imbalance in his ability to assert himself in a strong and confident way will prevent his ability to command the kind of respect required to win a presidential election.

************
McCain has been going through some interesting Uranian cycles. Beginning last October and continuing through June, repressive Saturn challenged Uranus in his birthchart and setting off his internal frustration of the Uranus/Mars square. At the same time, transiting Uranus made a sextile to Uranus in his chart, creating an awakening within him to new ideas and new ways of living his life, a cycle which completed in February. Concurrently, transiting Jupiter (the bestower of gifts and opportunity) opposed Uranus in his chart, opening the door to a sudden (Uranus) manifestation of those new ideas that had been percolating within him and freeing up the dormant energy of the square from Mars to Uranus in McCain’s chart. Suddenly he’s out in public espousing radically (Uranus) different philosophies of government (Jupiter) than ever in his public career. Adding yet another layer of complication is the square of transiting Chiron (exposing his inner wounds) to Uranus in his chart which began at the end of April, indicating that his sudden turnabout and radical (Uranus) expansion (Jupiter) is likely to result in psychic pain (Chiron) if he is not careful to process his ideological shifts in a more internal way that brings spiritual growth and transformation.

I suspect that John McCain, like many of his generation, sought to exorcise his demons through hard work and service. His stint in Vietnam resulted in his being taken as prisoner of war, where he was tortured and suffered greatly. He has said, “My determination to act with honor and integrity impels me to work in service to my country. I have believed that the means to real happiness and the true worth of a person is measured by how faithfully we serve a cause greater than our self-interest.” This is all very noble, but if we never turn within to face ourselves and the challenges that lie there, we are doomed to repeat the same inner cycles over and over.

John McCain may be trying on a different cloak in order to become president, which he believe will help him to achieve the self-respect that he has sought his entire life. But in the end, like all of us, he will have to look within and find himself.