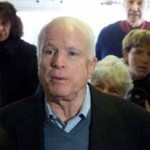 All but John McCain’s most ardent supporters are talking about McCain’s recent erratic and bizarre behavior that threatens his run for President.  In a campaign that has been more about emotional reactions than a clear look at issues, it doesn’t take much to throw a campaign off balance.  Republicans did not care for McCain to start with, then with his selection of Sarah Palin he became a star.  Now that the bloom is off Palin’s rose after her only interviews reveal her utter lack of understanding of world affairs, McCain has to appear that much more presidential.

The LA Times writes, “David Keene, head of the American Conservative Union, said some of McCain’s responses over the last 10 days were “goofy” and “just don’t make a whole lot of sense.” ”  In the same article, John Weaver, McCain’s former campaign manager, is quoted: “It was all very dramatic, but maybe the American public is tired of drama after the last eight years,  John needs to demonstrate he has a steady hand. He needs to be a bit more measured.”

That is not McCain’s style, and we can see that in his birthchart.  Mars in Leo can be flamboyantly (Leo) aggressive (Mars), and McCain’s Mars is squared by Uranus which exacerbates the situation.  Uranus is the revolution – the radical and the rebel.  The challenging aspects of Mars and Uranus often shows an individual whose rebellion cannot be contained, and unless they balance those energies within themselves there is always a fight lurking just under the surface.

McCain’s progressed Moon aspected his progressed Mars a month ago, and that influence is just now waning.  For someone with the underlying anger that McCain has, the irritation of Mars to the Moon can add gasoline to the flame.  In addition, transiting Chiron (wounding and healing) has been forming a challenging aspect (square) to his Sun, the second phase of which occurred in early September.  This can be a painful time when our old hurts and painful emotions are exposed, ideally so that they can be healed.  It can also bring health problems, and the droopy eye that McCain has exhibited recently has given rise to rumors of a stroke, or Bells Palsy.

The last big planetary event in McCain’s life right now is the double transit of Saturn and Uranus to the retrograde Saturn/Venus opposition in his chart, a point that denotes the potential for low self-esteem  (Perhaps this is why McCain paid a Hollywood makeup artist over $5,000 of taxpayer-funded money recently.)  This Saturn/Venus opposition is part of a Mutable Grand Cross in his chart, of which I wrote in my earlier article:

A Grand Cross is a challenging aspect in which four planets make 90 degrees to each other, with two pairs of planets in opposition to each other. Typically there is a buildup of tension with this configuration which promotes change and transformation within the individual, but with the Mutable Grand Cross this energy is never focused and tends to create distress and tension within the individual unless there is a motivating force that provides momentum. Without such a force this person will tend to waffle and become distracted. At his core, Mr. McCain has not yet resolved his inner sense of failure expressed through his retrograde Saturn.

Because McCain does not have a strong core of conviction, planetary transits over the Grand Cross can shake him even more than they would for others.  Uranus has been transiting over these points for the past couple of years and currently is sitting right on McCain’s Saturn, exacerbating the restlessness of his natal Uranus/Mars square.  Uranus wants to shake up all things Saturn in his chart: goals, rules, structures.   This would be great for a real maverick, but not a maverick who wants to be president.  Transiting Saturn is moving into alignment to oppose Uranus in the sky and Saturn in his chart, and that will be the real challenge.