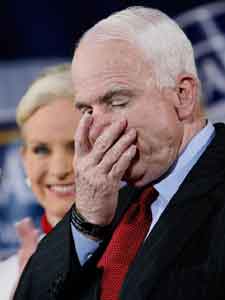 John McCain’s Virgo Sun is undergoing a transit of Saturn which began last November, took a second hit in February, and just concluded.  Because of Saturn’s tendency to create limitations and challenge, the transit of Saturn to the Sun can make it difficult for any individual to express themselves in the best light.

McCain’s greatest weakness is his inability to relate well to others, as shown in the opposition between Saturn and Venus (love and relationships) in his birthchart.  To exacerbate the situation even more, Saturn in his chart is retrograde, showing that he is particularly self-critical, and both Saturn and Venus are squared by Chiron (healing and wounding) which shows that this has been a lifelong challenge for him and a painful one.

Currently, Uranus is beginning a challenging transit to this T-square of planets including Venus, Saturn and Chiron in McCain’s natal chart, an event that began in May as transiting Uranus collided with McCain’s Saturn, and coming to a head in June, July and August with Uranus changing direction in what we call a “station” (where the planet virtually stands still) in an exact opposition to Venus and square to Chiron.

Uranus is the Awakener, the Disrupter.  It brings about change and a radically new way of doing things.  Often when we are undergoing a planetary transit, the planet in question appears in the form of a person who exhibits the traits of that planet to introduce its influence into our lives.  Uranus is personified in this transit by Barack Obama, the cool cat with Aquarius rising (ruled by Uranus) who is all about change. And Obama’s popularity and newness (Uranus) is bringing out all of the painful (Chiron) awkwardness of the guy who can’t get a date with the press (McCain’s Saturn/Venus opposition) who he complains has been ignoring him.

Over the next month McCain’s progressed Virgo Moon will catch up to a conjunction with his progressed Mars/Midheaven conjunction.  It’s quite possible that during this period we will see McCain blow up into one of his famous rages for which he has become so famous but which have been so notably absent during the campaign.

In November transiting Saturn will oppose Saturn in his natal chart and set off the whole Venus/Chiron thing.  Typically we would expect this kind of cycle to denote a time of difficulty, but some powerful people can glean the most from this transit and use it to work their way to success.  This is not usually McCain’s methodology, however, and I would guess that this Saturn event, coming around election time, will not be an easy one.