John Roberts takes a fall – the astrology of seizures

John Roberts takes a fall – the astrology of seizures 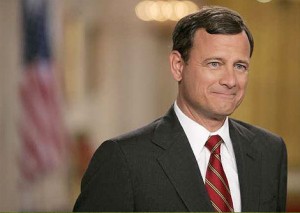 John Roberts suffered a seizure yesterday and fell at his Maine vacation home on Monday, July 30. This was the second time he had blacked out after experiencing what they are calling a “benign idiopathic seizure,” meaning the medical experts don’t know what caused it. That always sends me running to the chart, because undiagnosable medical maladies are often energy imbalances in the physical structure.

Roberts has an Aquarius Sun [view chart]. Aquarians often have an interesting medical history because as a rule their inventive, rational mind typically takes control of their emotions. Roberts has the Moon in Pisces, which does add water to his chart and shows a deeply sensitive nature, and his Moon is part of a Grand Trine in Water which includes a conjunction of Jupiter and Uranus in Cancer as well as Saturn in Scorpio. This suggests a comfort with the emotional realm overall (Pisces Moon) with a need to care for others (Jupiter in Cancer) although that must be done in a way that retains his autonomy and freedom (Uranus conjunct Jupiter).

Saturn in Scorpio reveals a strongly fixed nature and works well in the trine; however, that same Saturn in Scorpio also squares his Aquarius Mercury and Pluto. Mercury and Pluto are in opposition which lends an intensity (Pluto) to the mental realms (Mercury) and can indicate a tendency towards obsessive thinking. This is not easy for the Aquarian Mercury, which prefers to live in the more subjective realms where life makes sense and there are no underlying psychic demons such as the ones that Scorpio embraces. In this T-square the Saturn in Scorpio suggests a fear and discomfort (Saturn) with the Scorpio realm of the emotional underworld.

It is this T-square that was hit on Monday when Roberts experienced the seizure that sent him briefly to the hospital. The square of transiting Saturn to Mars exactly squared the Pluto/Mercury opposition in Roberts chart, and transiting Saturn was in exact conjunction to his Pluto.

This in itself does not signify a medical event, so I looked back to the earlier seizure episode that Roberts experienced in January of 1993. At that time transiting Chiron in Leo had just made a square to Saturn in Roberts’ chart and was preparing to conjunct his Pluto and oppose his Mercury; meanwhile, transiting Pluto was exactly square to the Mercury/Pluto opposition. He was in his “Pluto Square” at the time – this is the time when transiting Pluto makes a square (90 degree angle) to Pluto in our birthcharts and being the God of the Underworld, begins drudging up any hidden psychic debris from which we have been hiding.

I was unable to find the exact date for that seizure in January 0f 1993, but transiting Mercury would have been opposite Roberts’ Jupiter/Uranus square. Because Uranus rules electricity in general and electromagnetic energy in particular, the combination of Uranus and Mercury is often a volatile one that can bring about anxiety and other mental disorders.

From an astrological perspective, the timing of these seizure events indicates a reluctance on the part of John Roberts to delve into the deep emotional underworld where life is messy and complicated and full of darkness. Jealousy, rage, desire, loathing – all of these ugly things reside in that world, and the Aquarian nature prefers to remain in the world of the mind where all things make sense and emotions can be managed by reason. The darkness of the emotions get pushed to the basement, where they remain until a planetary transit activates them and the carefully constructed defense may begin to show cracks.

Perhaps the culprit is still hiding in the emotional basement.