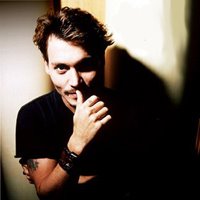 After many years of resisting commercial exploitation, Johnny Depp has become a major bankable star with the release of the Pirates of the Caribbean series. Beginning with his breakout role in Twenty-One Jump Street, Johnny Depp has fought the Hollywood machine even though it meant foregoing roles that would bring him great commercial success. Instead he focused on smaller character roles where he could practice the art of acting, aligning himself with quirky geniuses such as Tim Burton and John Waters. After a lifetime of what he calls “hillbilly rage,” he has mellowed into a mature actor with a grown-up life that includes family life with his children and long-term partner Vanessa Paradis.

Depp’s astrological chart shows that he was born with the Sun in Gemini. Gemini is ruled by Mercury, and is the sign of the trickster, the prankster, the messenger. Typically very communicative and verbal, Geminis (or those born with Mercury prominent in their chart) can be mercurial and adept at mimicry, able to slip in and out of roles easily. Leo, the sign of rulership, is rising in his chart, showing someone with a natural confidence and desire to be recognized and appreciated.

Uranus, the planet of individuality and rebellion, conjuncts Mars (the aggressive instinct) in Depp’s first house of identity and personality, a strong combination that tends to show reckless and rebellious behavior. Uranus in the first house often shows someone who is perceived as being “odd” or “strange,” and this is certainly true of Johnny Depp. He seems most comfortable playing characters whose weirdness protects them from hurt and emotional pain (remember Edward Scissorhands?).

Johnny Depp showed the Uranus/Mars combination from an early age; he was a rebel in his teens, suffering self-mutilation as a child and scrapes with the law and drug abuse by the age of fourteen. As a young actor he was well known for bad behavior resulting from a lack of respect for the studio process and the desire of Hollywood to turn him into a commodity. As an adult, he has cut his own road to success in films.

Johnny Depp has a Capricorn moon, identifying him as a serious individual who craves material security as well as emotional nurturing. Some interviewers have been surprised at Depp’s desire to continue the “Pirates” series, believing that he dislikes material success, but he has stated clearly that this is NOT the case. What he dislikes is having to be something other than who he is in order to be successful. He clearly enjoys the fruits of fame, with homes in L.A. and in the South of France, and his own island in the Caribbean. This Capricorn Moon is primarily focused on business and outcome, while the rest of his personality craves an outlet for his tremendous creativity. This combination can sometimes lead to internal stress between the artist and the businessman and we have certainly seen that in Johnny Depp.

For many years, he worked so hard to stay out of the limelight that he was virtually unnoticeable in films. But now, the regal nature of his Leo ascendant is drawing him out into the public view, and appropriately for a Leo, as a Pirate King.

The planets have been kind to Johnny Depp this year: a dance of Jupiter (abundance, possibility and good fortune) over his natal Pluto has increased his confidence (Jupiter) and opened up a new sense of power for him (Pluto). At the same time, Jupiter has favorably aspected Chiron (wounding and healing) in his chart, showing that old wounds and painful memories are being healed now. This is a combination of events that has put many of his old anxieties to rest and is opening up new doorways for him. The trine of transiting Uranus (originality) to Neptune (mystical and creative experiences) in Depp’s chart are enhancing the opening process and expanding his creativity and helping him to speak with a new voice.

A strong Saturn transit will begin to affect Johnny Depp in the fall and bring him a period of insecurity, but at his heart he is a hard worker and will be able to overcome any difficulties through sheer force of his will. Johnny Depp has learned to balance eccentricity with stability, the true road to success. As he says, honoring Uranus rising in his chart: “We should celebrate our individuality, not be embarrassed or ashamed by it. People do themselves a great disservice by not allowing themselves to see who they really are because they are afraid.”