Jon Stewart and the CNBC Smackdown

Jon Stewart and the CNBC Smackdown 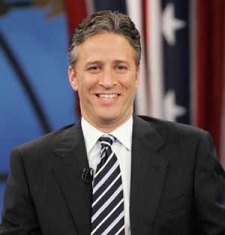 If you missed Jon Stewart’s crackdown last week of CNBC that resulted in a week-long mock battle between two mock journalists, head right over to Comedy Central and catch up on everything that ran last week.

I admit that I get much of my news from the Daily Show, and I am probably not alone.  Consequently, Jon Stewart’s influence is widening and many in the conventional news media are taking notice.  He delivered a blistering attack on the business television network CNBC for enabling the meltdown of the major financial institutions and encouraging average Americans to dump all of their money into the stock markets by encouraging sure gains.  The attack was not aimed at “Mad Money” creator Jim Cramer, but Cramer appeared on television shows as the voice of the network  as the drama unfolded last week.

Jon’s Sun is in Sagittarius, the sign of the philosopher, the humorist, and the adventurer, and his Sun is conjunct Mercury, the planet of information and communication. Sun/Mercury people are mobile, rarely stand still, and adept communicators and Jon is no exception. Jupiter in his chart is in Pisces, showing that his longing for meaning in life (Jupiter) is closely tied to a sense of compassion for others (Pisces), and that his religious experience (Jupiter) must be tied to a genuine experience rather than mere theology (Pisces). With Jupiter making a square to Sun/Mercury, though, he can be somewhat dogmatic about his beliefs but with several planets in light-hearted Sagittarius he does not take himself all that seriously

Pluto (power and transformation) and Uranus (rebellion) are conjunct in the chart as they were for all people born between 1962 and 1968.  This was a time of radical change, and individuals with this planetary signature carry that urge for cultural revolution within them.  It may be expressed in various ways, but for all there is a need to break free of any convention that doesn’t work and Jon Stewart is no exception.

Uranus and Pluto both make a square to Jon’s Sun (identity and personal spirit), showing a person who makes his own way and dislikes being told what to do (Uranus/Sun) and constantly reinventes himself (Pluto/Sun). His Mars (drive) in Leo (self-expression) shows a strong flair for drama and a desire to be on the stage. Born Jon Stuart Leibowitz, Jon dropped the Leibowitz at an early age and created a new identity (Pluto/Sun) for himself as a comedian (Mars/Sag).

Jupiter, planet of beliefs and philosophy, forms a “T-square” to Jon’s Sun and Mercury and also to the Uranus/Pluto combination.  This is a powerful planetary dynamic that shows a tremendous urge for independent thinking and social justice and transformation.

Jon’s Venus (relating to others) is in Scorpio, showing a passionate nature where others are concerned, but the fact that it is retrograde shows that he may be shy about expressing his feelings, or desires his relationships with others to be hidden. Certainly he appears to enjoy keeping his private life private!!

Jon’s gift is the Sagittarian ability to deliver a skewering attack while remaining genial and humorous.  With both Jupiter’s expansion and the rebellion of Uranus constantly challenging his natal Sun, he is never one to let well enough alone, and the fever for social justice shown by that powerful alliance of Jupiter and Uranus drives him in a relentless need to make a real difference.  Still he remains well-liked by many, and pundits from all walks of life and all sides of the political spectrum are grateful for the opportunity to be on his show.

Transiting Saturn (hard work and achievement) has been running over the sensitive T-square in Jon’s chart since the fall of 2007, coinciding with the writer’s strike in which he was quite active, and the Presidential campaign.  This can be a stressful and challenging planetary event, but for Jon Stewart it appears to have given him the additional strength and discipline to become one of the most powerful journalists of our time.