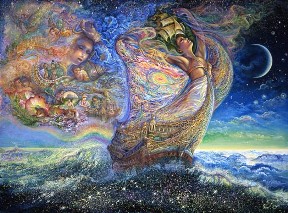 Jupiter and Uranus are the two planets of liberation, and back in May they converged in the first sign of Aries, the sign of courage, warfare, and action.  The two turned retrograde over the summer, and a few weeks ago Uranus retrograded back into Pisces to complete its mission of revolutionizing (Uranus) the realm of our spiritual experience (Pisces).

Yesterday Jupiter retrograded back into Pisces and the two planets are within a degree of each other now, so the influence of this conjunction is strengthening leading up to the exact alignment on the 18th of September.  The combination of Jupiter and Uranus in Pisces will have a much different effect than the explosive conjunction in Aries back in May and June. Jupiter seeks expansion, optimism and shared meaning in life; Uranus demands radical action to break free of restrictions.

The second and third phases of this cycle will occur in Pisces.  In Aries, there is a big explosion of energy moving out into the world.  In Pisces, the pressure to release and expand moves inward and creates a force of pressure into the world of dreams, ideals, and spiritual realities.  There may be passive-aggressive forces at work here since it is more difficult to identify the players; in Pisces the archetypes are submerged into the deep waters of the sea.  Emotions may feel unsettling at times, all the more so because they are difficult to identify.  This is a time to ride the waves of the internal flow.

The stirrings of liberation made themselves known during the first Aries phase.  Now, in our individual lives, we are asked to go more deeply into the multiple layers of our inner realities so that we can find the true source of liberation and freedom.