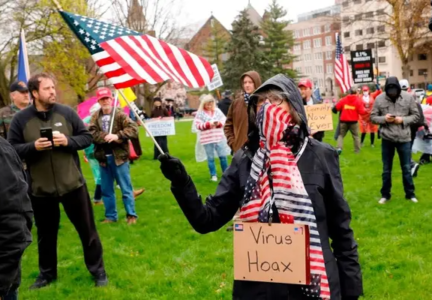 We usually think of Jupiter as the lord of good fortune, optimism, and expansion in all things and certainly that’s true.  Jupiter is also connected to our search for meaning, and the philosophies and theologies that we create to make sense of the world.   Pluto is an outer planet – not reflecting a facet of the personality as the personal planets do, Pluto represents the power of creative destruction to transform and empower, often symbolized by death and resurrection.  Its power is intense and focused, and therefore can denote obsession, especially in the areas of power and control.

In natal charts, the hard aspects (0 degrees, 90 degrees, 180 degrees) of Jupiter and Pluto can denote individuals with obsessive (Pluto) beliefs (Jupiter), including the certainty they’re right.  Examples of this phenomenon include:

Anyway, you get the idea.  So now we are in a global crisis in which a virus pandemic is making a chokehold in every corner of the world, the viral spread of which began in mid-January under a conjunction of Saturn (hardship) to Pluto (destruction).  The entire world hunkered down in lockdown out of fear of the virus, a very Saturn/Pluto manifestation.

On April 4, 2020 Jupiter aligned with Pluto, marking the beginning of widepread resistance to the lockdown. Out of this resistance conspiracy theories have emerged.  Conspiracy is connected to Pluto and the darkness of suspicion, deceit, betrayal, and the other dark human experiences which linger in the underground of the human psyche.  Political conspiracy theories have been widespread as long as humans have been alive, but in today’s world ignorance can be fatal.

Chris Brennan posted on Facebook today as I finish this post: “Jupiter-Pluto conjunction in the sky now = rapid growth of conspiracy theories that are being used to control people, by tricking them into thinking they have uncovered hidden/illicit information. It’s brilliant really, because it tricks people into believing that they are using critical thinking.”

Because of Pluto’s rulership of power, figures of power such as religious leaders and heads of state wield a particular power when it comes to instilling beliefs in people and this is a problem in some countries at the moment.  Boris Johnson downplayed the virus until he caught it and nearly died.  Bolsonaro in Brazil is downplaying the virus, calling it a common cold while thousands of his constituents are dying.  President Trump has consistently downplayed the virus, and his most devoted followers are now convinced that the virus doesn’t exist, that it’s a conspiracy to bring down his presidency.

Jupiter and Pluto will be within a few degrees of exactitude for much of the year so don’t expect this phenomenon to diminish any time soon.  But facts are still important, and belief can be dangerous when it is based on lies and misinformation.