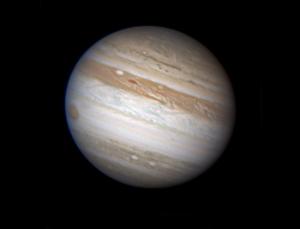 Uranus brings surprising events, and as Jupiter is nearing a conjunction to Uranus we see this news:

Jupiter has lost one of its prominent stripes, leaving its southern half looking unusually blank. Scientists are not sure what triggered the disappearance of the band.

But recent images taken by amateur astronomers show that the southern band – called the south equatorial belt – has disappeared.

The band was present at the end of 2009, right before Jupiter moved too close to the sun in the sky to be observed from Earth. When the planet emerged from the sun’s glare again in early April, its south equatorial belt was nowhere to be seen.

As our observation equipment becomes more precise we will have the opportunity to observe more planetary changes.  Not all of these changes affect us directly, but the synchronicity is always interesting!