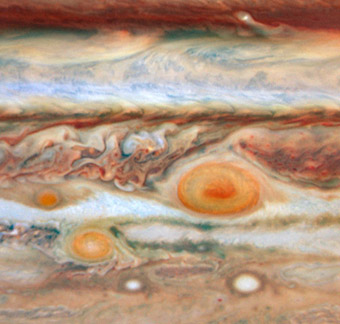 Jupiter changes direction today, moving forward again after several months of retrograde travel.  When planets change direction they slow down to a crawl and their influence becomes more powerful than ever.
Jupiter’s influence is all about good luck and good fortune, as well as confidence and our potential for growth in all areas.  There is a tendency towards generosity but also of indulgence.  Jupiter is in Aquarius now, where it has been aligned with Chiron and Neptune since the early part of 2009.  In Aquarius, Jupiter is even more idealistic than usual, and this year Jupiter has been working overtime to promote ideals of fairness and social justice under the Aquarius banner.  That battle has brought up a lot of chinks in the social fabric, with the pressure of Chiron to resolve unhealed wounds, and the insistence of Neptune to go beyond that which is practical.
Jupiter will catch up to Chiron and Neptune in November and the three planets will travel tightly together again until the conjunction peaks once again in February.  These three turned retrograde within a day of each other at the end of May, causing us to look back and do the work of healing the past that has been required.  With Jupiter moving forward again we will be able to move forward once again and put the benefits of this work into action.
Share this article...
By Lynn Hayes|2020-11-03T14:10:02-05:00October 13th, 2009|Planetary cycles|Comments Off on Jupiter Turns Direct Today!