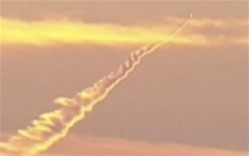 The Pentagon Tuesday said it was trying to determine if a missile was launched Monday off the coast of Southern California and who might have launched it.

Spokesmen for the Navy, Air Force, Defense Department and North American Aerospace Defense Command said they were looking into a video posted on the CBS News website that appears to show a rocket or some other object shooting up into the sky and leaving a large contrail over the Pacific Ocean.

The video was shot by a CBS affiliate KCBS’ helicopter, the station said Tuesday.

“Nobody within the Department of Defense that we’ve reached out to has been able to explain what this contrail is, where it came from,” Pentagon spokesman Col. Dave Lapan said. “So far, we’ve come up empty with any explanation.”

This just one of a series of weird events that have happened in the sky over the past year.  Astrologically, we have had a conjunction of Uranus (ruling the sky, and also strange events) conjunct Jupiter (amplifying those strange events) since April and May of 2010 that has coincided with these weird events which include:

Jupiter and Uranus are well within range of their conjunction.  This planetary combination is associated with unusual events as well as scientific breakthroughs and space travel.