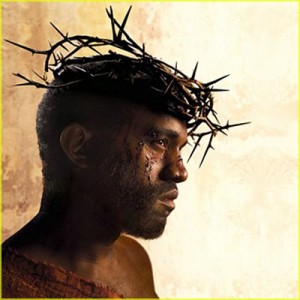 You’ve got to admire Kanye West’s cojones. In the most repressive political climate since the Puritans ran this country, West is not afraid to express his controversial (but well-researched) opinions on everything from the origin of AIDS (a man made disease placed in African communities with the polio vaccine, an idea that is gaining respectability) to the lack of caring of the Bush administration for black people after Hurricane Katrina. Now on the heels of his song “Jesus Walks” he appears as Jesus on the cover of Rolling Stone magazine and has been quoted on saying that he would be a character in a modern bible because he is an inspiration to the culture and is definitely in the history books already. At the same time he is one of the most successful hip hop stars in history, with ten Grammy nominations. West began his career as a record producer and songwriter but went on to create his own records, even recording three weeks after a traffic accident through a wired jaw.

West was born into an affluent family and had more opportunities than many hip hop stars are born with, but he also has the ability to work hard and perfect his craft. Mars (personal drive) in his chart is in Taurus, a fixed sign that is stubborn and tenacious. This gives him an ability to persevere (Taurus) in that which he wants to achieve (Mars) that a Gemini with their need for change and stimulation would not normally possess. His Mars is opposed by radical and outspoken Uranus, giving him a quick (Uranus) temper (Mars) and his rebellious nature and tendency to speak out without fear.

Kanye West is just heading into his Saturn return, a period between age 28-30 when Saturn returns to its place in our birthchart and we are forced to leave our childhood behind and become adults. This period can be miserable for some and bring great success to others. I am pretty sure that we are just beginning to hear from Kanye West, and that he will be tested in the public eye over the next year as his Saturn return progresses. However, his success is also only only just beginning and he is likely to remain a major player in the music world and in the public eye for quite some time to come.