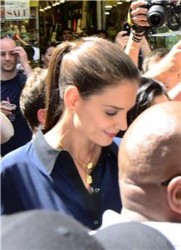 by Lynn Hayes Katie Holmes has filed for a divorce from Tom Cruise.  Evidently she filed Thursday as Cruise was heading to Iceland to shoot his new movie. I wrote a profile of Katie Holmes in 2006 when she and Cruise first became a couple.  In that article (snarkily entitled “Run Katie Run!”) I wrote: She has both Moon and Jupiter in Leo, showing a strong need for admiration and attention and a need to develop the personal ego. Her Venus is in Scorpio, indicating someone who has strong passions and emotions, and craves intensity in relationships. Yet her Moon is square to Venus, a configuration that often indicates a conflict between the maternal archetype (Moon) and the sexual nature of the goddess Venus. Women with these conflicts tend to have difficulty integrating these two archetypes and tend to swing from one pole to the other. In addition, Katie’s Venus is conjunct rebellious and independent Uranus, showing that she craves freedom and resists convention. The combination of Venus in Scorpio, which craves an intense bond, with Uranus sets up an inner conflict that is difficult to manage, particularly for a relatively young person who may lack a deeper level of self-understanding. You can read my profile of Tom Cruise here.  Friends of Katie’s have evidently reported, not surprisingly, that Cruise dominated the relationship, dictating the clothes that she wears, the parts that she played and even the name that she used. The astrology of Katie’s rush to freedom begins back in January with a series of Jupiter transits throughout January and February that would have inspired courage and confidence to expand her life.  A challenging aspect of Saturn to the progressed Moon in early March could have created some depression, followed by the beginning of a transit of Uranus, the planet of liberation and breakthroughs, in a strong aspect to her Mars, planet of will and assertion. In addition, her progressed Sun and progressed Mars align this year, giving her the fuel that she needs to assert herself in the world with greater force.  She’ll need it, because this is likely to be a battle not only with her soon to be ex-husband, but the forces of Scientology as well. for daily planetary cycles visit my Facebook and Twitter pages.