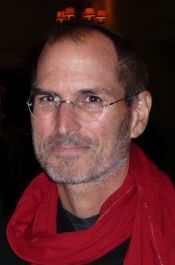 Read more about the astrological chart of Steve Jobs and his health issues here. Apple Inc. has just announced that Steve Jobs had a liver transplant about two months ago and is expected to be back at his desk at the end of June.

In my earlier article from January I described the correlation of a transit of Chiron over Jobs’ natal Saturn to his health issues.  Saturn in the birthchart reveals where we are likely to encounter challenges and limitation in our lives, and Saturn in Jobs’ birthchart is in a challenging square formation to Pluto. So the transit of Chiron to Saturn which began last year set off the inner dynamic in Jobs’ chart, requiring greater balance and a healing of inner psycho-emotional issues.

The liver transplant would have occurred at the time when Chiron made its first exact opposition to Pluto, as part of the triple conjunction of Jupiter, Chiron and Neptune.  This is an important time for Jobs to create more balance in his life, and his chart reveals that he is much more of a head guy than a physical guy.

Chiron and Neptune will continue to affect him throughout the summer before backing off a bit as they retrograde off the point of Jobs’ natal Pluto.  However, the two will come around again next February as they unite for their exact conjunction and this will be a significant period for the health of Steve Jobs.