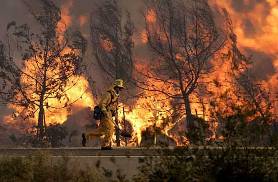 Jerry asked in the comments about the relationship between the chart of Los Angeles and the current wildfires and I thought this would make a good post.  There are a couple of charts for Los Angeles.  The first one, which seems to be most widely used, is the September 4, 1781 date of the founding of the city by fourteen families as directed by King Carlos III of Spain.  The chart for this date has the Sun in Virgo, with the Moon in Aries.

The second date used is April 4, 1850, the date of the incorporation of the CIty of Los Angeles as an American city following the Mexican-American war.  Warning: geeky astrological details ahead. This chart shows six planets in fiery Aries including a conjunction of Uranus and Pluto in Aries and a conjunction of the Sun and Saturn in Aries that forms a T-square to a Moon/Mars opposition.  Unfortunately, the time of incorporation is not known.

The incorporation chart makes more sense to me because Los Angeles is a uniquely American city and its founding as a pueblo was really a different incarnation than what we have today.  The chart also makes more sense, although as you know if you read this column I try not to select charts based on whether or not they “work.”  We all made that mistake with Susan Boyle when the initial birthdate, which worked very nicely with our imagination of who Susan Boyle might be, turned out to be incorrect.

Aries the sign of initiation and inspiration, but it is also the sign that is ruled by the God of War.  There is an aggressive energy to Aries that cannot be denied.  Following the incorporation of the city following the victory of the US over the Mexicans in 1850, some of the residents rebelled against the new Anglo powers in a full-scale revolt.  Los Angeles had the highest murder rate of the entire nation.  (Source: Wikipedia)

It’s said of Los Angeles that there are four seasons: fire, earthquakes, mudslides and riots.  That is mirrored by Mars (fire and aggression) in watery Cancer, squared by Saturn (compression and restriction) in Aries (fire), all tightly aspecting the Sun or the Spirit of the city.  The Capricorn Moon holds everything together with an inbred desire for success in all things, but Saturn is always creating challenges there.

The current spate of wildfires were a surprise because they began before the expected wildfire season in the fall when the Santa Ana winds begin to blow.  These fires started as transiting Mars entered Cancer on August 26th and formed an exact opposition to Pluto (see my articles about this from last week).  Conflict between the God of War (Mars) and the Lord of Destruction (Pluto) can be quite intense, and in this case both planets formed a stressful square to Mercury in the Los Angeles chart.  Mercury rules communication, and the “Station Fire” has threatened transmission towers for television and radio stations at the Mount Wilson Observatory site.

The State of California also contains the Uranus/Pluto conjunction in Aries.  What an intense time that was (1849-1851), the time of the goldrush and lawlessness across the American West.  Jupiter, Chiron and Neptune are all in the later degrees of Aquarius and forming a harmonious trine to the Uranus/Pluto conjunction both the L.A. chart and the California chart, particularly back in May when the fires started and Jupiter was in an exact trine to both Uranus and Pluto.