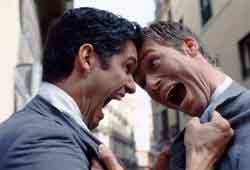 We’ve had quite a busy few days in the comments section here at Astrological Musings.  Normally I love to get comments – it’s so cool to see who’s here and what they think of everything.  And the political posts generate the most comments and the most passionate comments.

This election has really brought out everyone’s fear and anxieties, it seems.  John Oliver on the Daily Show got this right a week or two ago, saying that this election has finally united America in the fear of what will happen if the other guy gets in:

There are lots of astrological reasons for this burst of fear and suspicion: Saturn (convention and safety) opposite Uranus (new and different and risky), Pluto (death of the old order) in Capricorn (structures of government, business and finance) which has everyone a little edgy. But over the last few days we’ve had Mars squaring Neptune.

Mars is in Scorpio, where the aggressive instinct (Mars) is expressed with intensity and passion (Scorpio), and a square to Neptune (spirituality and subconscious) brings about an inner conflict and difficulty expressing our fears and concerns (Mars) directly, as Neptune tends to submerge whatever it comes into conflict with. With our assertive instincts (Mars) operating on a more subconscious level (Neptune), it becomes difficult to really hit our mark. We can become confused, our self-confidence eroded, which makes us angrier. It sometimes becomes less clear to us what we were even angry about in the first place. This is a fast moving transit and will be over in a couple of days. So will the election, hopefully, if there is a clear winner. Everyone wants to believe that they are Right, and with politics and religion (both ruled by Jupiter, by the way) our viewpoints are tied inextricably to Who We Are. Then we begin the healing process of bringing the nation together to work together to solve the country’s problems. Hopefully the process of bringing folks together will go more quickly here at Astrological Musings. :)