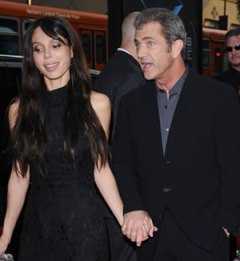 Mel Gibson isn’t having a very good week.  First news reports announced that Gibson and his ex-wife Robyn were being sued for a construction company for over $200,000 in work performed on their Malibu home over the past twenty years.

Then TMZ reported that Gibson’s estranged girlfriend Oksana Grigorieva, with whom he fathered a son last year, obtained a restraining order against Gibson last week after telling a judge that he beat her up last January, despite the fact that the two continued traveling together after the alleged event.  Gossip rags speculate that Grigorieva is attempting to renegotiate the terms of the custody agreement and that Gibson was the first to file a restraining order against Grigorieva to keep her from discussing the terms of their agreement and other details of their relationship.

Mel Gibson has been in and out of the news for a variety of scandals since 2006 when he was arrested for drunk driving in Hollywood and released a torrent of anti-semitic language to the police.  Gibson (1/3/56, 4:45 pm, Peekskill NY) has the Sun in Capricorn which gives him a strong focus on responsibility and hard work.  His Sun is “angular,” sitting right on the descendant (cusp of the seventh house) of his chart, suggesting that he is a person who defines himself though his relationships.  He has the Moon in Libra, which echoes that need to be partnered, and he was married for 28 years which is a rarity in Hollywood.

Gibson has some challenging planetary systems in his chart, including a conjunction of Pluto (power issues) to Jupiter (philosophy and shared values). The combination of these two planets can indicate a person who seeks to impose through power and manipulation (Pluto) their values and ideology (Jupiter) onto others. Mars is conjunct Saturn in Gibson’s chart, both in Scorpio which is ruled by Pluto and deals with issues of power and secrecy. Mars in Scorpio is extremely charismatic and sexy, but conjunct Saturn, which tends to be more repressive, it often doesn’t find its full expression. The combination of Mars with Saturn can indicate a frustrated individual who is unable to activate the assertive urge of Mars, it’s like driving with the brakes on.

These combinations create a huge challenge as they constantly conflict and create a buildup of energy that needs to be released. Gibson’s films have provided this release for him; they have tended to portray characters who are tortured emotionally and face physical abuses in order to attain their noble goals. Evidently Mel Gibson has battled alcoholism throughout his career as he attempted to keep these emotional challenges in check.

Back in 2006 when he was arrested for drunk driving and the subsequent scandal over his anti-semitic remarks, transiting Pluto was in a challenging square to Mars in Gibson’s chart and also to his Midheaven, the point of career and public life.   Pluto is the planet of destruction and regeneration, and his career was certainly never the same after that event.

Uranus, planet of “shock and awe” and surprising new developments started transiting in opposition to his natal Moon last April and May, creating change and disruption in his emotional life (Moon).  But it wasn’t until Jupiter (journalism) joined Uranus in that opposition to his Moon in June that his private life was exposed to the public thanks to TMZ.