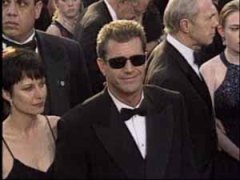 Back in August of 2006, the image of Mel Gibson underwent a well-publicized breakdown after he was arrested for drunk driving in California and launched into a tirade against Jews.  I profiled Mel at the time:

Gibson has some challenging planetary systems in his chart, including a conjunction of Pluto (power issues) to Jupiter (philosophy and shared values). The combination of these two planets can indicate a person who seeks to impose through power and manipulation (Pluto) their values and ideology (Jupiter) onto others. Mars is conjunct Saturn in Gibson’s chart, both in Scorpio which is ruled by Pluto and deals with issues of power and secrecy. Mars in Scorpio is extremely charismatic and sexy, but conjunct Saturn, which tends to be more repressive, it often doesn’t find its full expression. The combination of Mars with Saturn can indicate a frustrated individual who is unable to activate the assertive urge of Mars, it’s like driving with the brakes on.

These combinations create a huge challenge as they constantly conflict and create a buildup of energy that needs to be released. Gibson’s films have provided this release for him; they have tended to portray characters who are tortured emotionally and face physical abuses in order to attain their noble goals. Evidently Mel Gibson has battled alcoholism throughout his career as he attempted to keep these emotional challenges in check.

Everyone now knows that Mel Gibson was arrested for drunk driving in Malibu California on July 28, and that the transcript of the arrest record shows that Gibson is currently experiencing a transit of Pluto in square to his Midheaven. The Midheaven is the point of highest aspiration in the birthchart; it also shows how our life is played out in the public eye. This cycle began for Gibson back in December and is currently in the second phase of the cycle. The television film on the Holocaust which was announced when Pluto first aspected Gibson’s Midheaven has now, during the second phase, been canceled. The last phase of this cycle will take place in December, coinciding with the release of his next film Apocalypto (since Pluto rules death and rebirth, this is perfectly symbolic).

The current scandal over Gibson’s remarks in the current climate of religious conflict has already affected his career (Pluto transiting the Midheaven), but it may create an environment for him where real transformation can take place, and I suspect that what we are seeing is only the tip of the iceberg. But in the Midheaven, particularly since he is a public person, that transformation will take place squarely in the public eye.

What wasn’t so well-known is that Mel and his wife separated on August 26 of 2006, shortly after his arrest.  According to a family insider, Mel had been depressed beginning in the summer of 2005, but by early 2006 his alcohol addiction had returned.  These dates correspond exactly to a transit of Pluto, the planet of death and rebirth, in a challenging square to the Midheaven of Mel’s chart that describes his career and public persona, and also to the Nadir of the chart which represents our home life.  The final phase of that cycle came in August when the separation occurred.

This is no doubt a painful time for Mel.  The triple conjunction of Chiron, Jupiter and Neptune, which is creating some emotional pain for many people, is exactly square to that combination of Mars and Saturn in his chart and he is no doubt experiencing a level of powerlessness that he has not felt before.  Transiting Saturn is exactly square to the Nodes of the Moon in his chart which point the direction of our evolutionary growth, showing that this is an extremely important time for him to find his way.  He also has a number of challenging transits of Jupiter which indicate that his ego is likely to be challenged and that the liberation that he is experiencing may not be exactly what he is looking for.

It’s also interesting that Mel and Robyn are in the 28th year of their marriage, which is a Saturn cycle.  There is some evidence that marriages run in the same 7-year cycles (hence the 7-year itch) as human development, and so this is the Saturn return for their marriage.