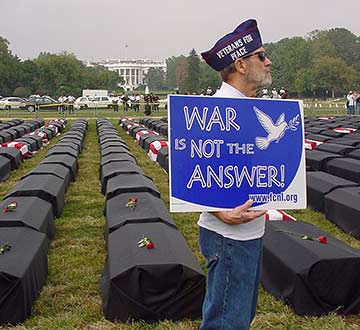 This article has appeared on this blog at least twice before, but I still like it.  I was a college student during the Vietnam war, and in demonstrations and marches against the war we decried the philosophy of our government that killing for peace made sense. On September 11 we were attacked by Osama bin Laden, and 2,646 Americans were killed.

Since then, an estimated 225,000 human beings have become casualties of wars in Iraq and Afghanistan.

I am not a pacifist, but I believe in healing. Where there is dysfunction, there is a need for healing that dysfunction. If Americans are hated, perhaps we should find out why. We had a beautiful opportunity in Afghanistan after the attacks of September 11 to go into that country and rebuild it; to drive out the Taliban and capture bin Laden and win the hearts and mind of the people. Instead we took every resource of the US military into a country that did not attack us and that we couldn’t maintain.

Perhaps we could take some of the billions of dollars being spent by military contractors to rebuild Iraq and Afghanistan over and over again, and invest in programs in the middle east that would help the people in these countries. This is what Hazbollah has successfully done for years in Lebanon. This is what AlQaeda is trying to do; provide funds and a sense of pride.

Killing for peace has never been a goal that makes sense. In the ’60s, we used to say “Killing for peace is like f*#cking for chastity.” To kill innocent civilians for peace didn’t make sense then and it doesn’t make sense now. On this Memorial Day, let’s remember those that have fallen in the name of ego and finance and pray for wiser leaders, and then vote in that direction!!