Mercury turned retrograde yesterday, and the stock markets all over the world responded today with the expected reversal that usually occurs during Mercury Rx periods.  In the US, the Dow Jones Industrial Average appears to have peaked around January 6 when Mercury (communication and ideas) began separating from Jupiter (optimism and opportunity) and reality began to beckon.  Mercury, now appearing to travel backwards from our perspective on earth (retrograde motion) will approach another conjunction to Jupiter on January 15th when it will be trined by the Moon.  This is a time when we will want to feel optimistic with the Moon there adding an emotional craving to the Jupiterian optimism.  Will that be enough to drive some life into the markets?

And what about the economic stimulus package that Barack Obama is rushing through Congress?  Thankfully, it looks like Congress will not deliver this bill until early February, well after Mercury turns direct.  But will a stimulus package be enough to overcome the mood of fear that Pluto in Capricorn has wrought?  The New York Times wrote, “the biggest obstacle to economic activity right now is not a shortage of money. The real obstacle is pervasive fear, which has made banks reluctant to lend and companies reluctant to invest in expansion.”

Expansion = Sagittarius, now gone and replaced by Capricornian conservatism and caution.  Now is not the time for more lending and more borrowing – now is a time for building, for investing in something that you can smell and taste.  Capricorn isn’t interested in swap derivatives; it likes buildings, bridges, highways.  Practical stuff that will last for generations.  In this respect Obama’s vision is aligned with the astrological reality.

Mid-January looks like it might have some nice possibilities for investors, with the Mercury/Jupiter conjunction and a harmonious aspect (sextile) between Venus (values and money) and Mars (action and drive).  Mars is in Capricorn where the drive and desire (Mars) is for that which is practical (Capricorn), an attitude well-suited to the economic climate today.

Meanwhile – remember that Mercury is the Trickster, and things are not always what they seem.  Use this Mercury retrograde period to go back and RE-balance your portfolio, RE-vise your projections, and RE-duce your expenses.  Then when the Mercury/Jupiter influence offers a window you will be prepared to take advantage of it! 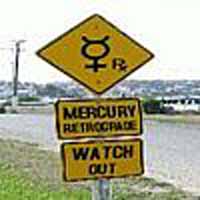