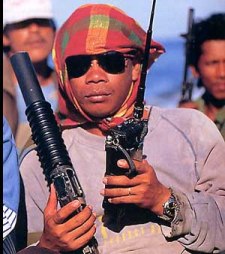 photo from Nick Ryan’s website. When I first heard about the new epidemic of piracy in Somalia I confess I thought it was a joke. Pirates, I thought, were the legendary ruffians that terrorized the Caribbean hundreds of years ago.  It turns out I was wrong, and piracy is alive and well and has been for years, particularly off the Somali coast and other areas including Indonesia, Bangladesh and Brazil.

Modern piracy evidently thrives on political unrest, and political unrest is often seen when Saturn is in a stressful aspect with Uranus.  Saturn represents established governments and the status quo, and Uranus is the revolutionary, the oddball, the eccentric.  Pirates act outside of any governmental system, and seek to undermine the conventional structure through acts of rebellion and violence for financial gain.

The last peak of piracy incidents occurred in the first half of 2003, the worst 6-month period on record according to Wikipedia.  This coincides with the opening square in the Saturn/Uranus cycle, when Saturn in Cancer formed a square to Uranus in Pisces.  The entry of Pluto into Capricorn in 2008 witnessed another uptick in incidents of attacks by pirates, accelerating as Saturn moved into position to oppose Uranus in the sky.  By September and October and into November and December, when Saturn and Uranus were within five degrees of their exact opposition, the incidents of pirate attacks had accelerated steeply, reflecting the intensification of the conflict between the radical behavior of Uranus, which seeks to break up the power structure, and the suppressive factor of Saturn.

The second phase of the Saturn/Uranus opposition occurred in early February and seems to have coincided with increased publicity for the piracy incidents.  Saturn and Uranus will face off an unusual five times before completing the cycle in July of 2010, and by then Uranus and Pluto will be preparing for their own battle which will create its own intensity of radical behavior.

Saturn is responding to the Uranian behavior by sending more ships into these waters to suppress (Saturn) the rebellious activity of the pirates (Uranus).  The question remains whether the nations currently in power have sufficient resources to quell these microrebellions as they spread to follow governmental instability.