More on the astrology of Sonia Sotomayor

More on the astrology of Sonia Sotomayor 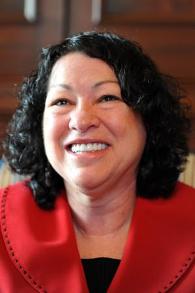 Mary Plumb at The Mountain Astrologer has posted an interesting comparison of the chart of Sonia Sotomayor with the chart for the US.  An interesting point in Mary’s excellent article is that Ms. Sotomayor was born with Mercury having just turned retrograde.  Because it had just changed direction, Mercury was moving slowly at the time of her birth, As Mary writes, “The very slowly moving Mercury at birth shows a deliberate turn of mind.”  However, Mercury conjoins Uranus which tends to denote an original thinker, one who is not encumbered by rules or what others think.

Ms. Sotomayor’s Cancer stellium lines up rather nicely with the Cancer stellium in the US chart, suggesting a deep connection and a loyalty of Ms. Sotomayor to the US.  However, her Sun/Mars opposition, which gives her an outspoken personality and the courage to speak her mind, puts her Mars (aggression) exactly opposite the conjunction of Venus and Jupiter in the US chart.  She is sure to create some controversy and tension (Mars) in the court, and by extension, in the way that some Americans view the traditional values (Venus/Jupiter) upon which they have come to rely.

You can read my original profile of Ms. Sotomayor here.