More on the transhuman: Autism and savant skills

More on the transhuman: Autism and savant skills 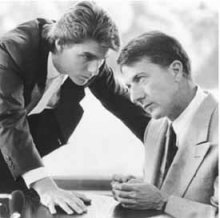 Thanks to Rich for this link to an article that confirms what has only been hinted before: that many people with autism possess skills not found in the general population:

Savant-like skills, such as astounding memory, perfect pitch or the ability to multiply very high numbers together, may be much more common among people with autism than previously thought.

A new study of about 100 adults with autism shows that one third have skills that stand out, both in comparison with their other abilities and with the skills of the general population. Previous studies put the prevalence of savantism in autistic people as around 1 in 10.

“People often focus on the things people with autism can’t do,” says Patricia Howlin of the Institute of Psychiatry at King’s College in London, who led the study. “One of the things our study illustrates is that these are people who do have special skills but they are not being used.”

This is a topic of particular fascination to me, and I have for a long time speculated on the connection between autism and the development of a new breed of humans.

One-third of the population is not a hugely significant number, but I think what is more significant is that researchers are beginning to look for positive aspects to the autism phenomenon.  I predict that with more and more research like this, we may discover that the human brain is in fact evolving and changing, and that rather than a disorder, autism is a new modality of consciousness.

For more on the savant/autism connection, check out this amazing interview with Daniel Tammett, a noted savant with Asperger’s who has written two books on the subject including Born On A Blue Day: Inside the Extraordinary Mind of an Autistic Savant .