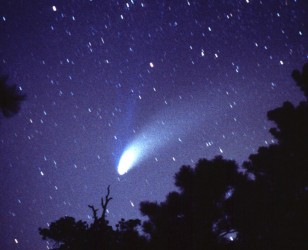 “Comet Elenin will not only be far away, it is also on the small side for comets. And comets are not the most densely-packed objects out there. They usually have the density of something akin to loosely packed icy dirt,” said Yeomans. “So you’ve got a modest-sized icy dirtball that is getting no closer than 35 million kilometers. It will have an immeasurably miniscule influence on our planet. By comparison, my subcompact automobile exerts a greater influence on the ocean’s tides than comet Elenin ever will.” (Don Yeomans, NASA researcher)

I’m not saying I believe that the poles will shift and the Earth will end as it passes through the comet’s tail.  But I’m not sure I would place all of my faith in scientists – after all, scientists have a bad habit of lacking imagination and an appreciation for the magic of the Universe.