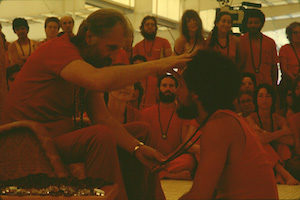 I recently watched the Netflix documentary “Wild, Wild Country” about the town created by the followers of Baghwan Shree Rajneesh that began as a utopia of blissful cooperation and devolved into madness and unimaginably bizarre crimes of attempted murder and fraud.

The conjunction of Uranus (radical change) and Pluto (destruction of the old and transformation of the new) in the late 1960s took place in conservative Virgo, and the established morays of the previous decades were blown apart to smithereens.  Women began fighting for the right to be equal citizens.  People of color refused to sit in the back of the bus and demanded to sit at lunch counters and use any damn water fountain they pleased.

Religion was another arena that saw a radical transformation as the dogma of established religion was questioned and many began exploring other religions, including Eastern mysticism.  The acid experiments of the 1960s led to the spiritual seeking of the 1970s, symbolized most prominently by the conversion of Richard Alpert, colleague of Timothy Leary in the search for psychedelic enlightenment, who transformed into Ram Dass in 1971.

Neptune is the planet of spiritual experience and humanity’s search for an authentic connection with the divine.  Where Jupiter creates theologies and religious belief systems, Neptune says “forget all that nonsense and come directly to me.”  Neptune traveled through Scorpio between 1956 and 1969-1970 and inspired a desire to release sexuality from the shackles of marriage (Neptune in Libra) and eventually, in the 1960s, to experience sexuality as a pathway to bliss.  Neptune in Scorpio also generated a renewed interest in the occult, with the release of the Rider-Waite tarot deck to the general public in 1959.

Neptune moved into Sagittarius in 1970, bringing the Sagittarian interest in celebrity and higher learning into the human desire to merge with the divine.  Almost immediately, the shift towards gurus and spiritual teachers became apparent.  Although gurus such as the Mahareshi Mahesh Yogi (Transcendental Medication) and Swami Prabuphada (Hare Krishnas) had been around for many years, suddenly their message spread like wildfire throughout the world, along with many others.

The story of the Bhagwan (Rajneesh), later known as Osho, is unique.  Unlike the more traditional Eastern mysticism of the other gurus, Rajneesh began his career as a professor of philosophy before turning his attention towards spirituality.  In 1971 he adopted the Bhagwan Rajneesh moniker and his preaching of sexual openness and the importance of sexuality in the path to enlightenment brought him fame and renown as well as a certain level of infamy.  The freely sexual commune that he created in Oregon in 1982 when Pluto entered Scorpio quickly devolved into a mess of intrigue, plots, spies and murder.

The Heaven’s Gate cult which committed mass suicide in 1997 also had its roots in the early 1970s when a failed actor and a nurse gathered a collection of followers to turn away from pleasures of the flesh and await transport to the Next Level. (An excellent podcast detailing this cult can be found here.) And it’s hard to forget the tragedy of the Jim Jones cult mass suicide in the 1970s.

I was a part of one of the 1970s cults and watching the Netflix documentary about Rajneesh both disturbed and fascinated me.  Many of us who were in our teens and early twenties in the early 1970s were born (1948-1955) with Uranus in Cancer,  feeling like misfits (Uranus) in our own families (Cancer).  I remember the first meeting I attended where I was introduced to the teachings of the young Guru Maharaj Ji – feeling so welcomed and like a part of something wonderful for the first time.  I was so lonely and desperate to feel loved and like I belonged to a loving family, and that’s what I found in this community.  I was already meditating and doing yoga so extending the meditation to two hours a day and attending satsang (meetings of truth) each evening was not a drastic step.  Meditation probably saved my life and took me out of a life that was deteriorating rapidly into something quite dark.

After completing my college degree I was whisked away by friends in the community to the International Headquarters of Divine Light Mission where I found myself living in an ashram and cooking lunch for the workers in the office.  It all seemed quite magical and exciting at the time: working in a community to bring light and love to the world.  I never considered it a cult, and neither did any one else.  Yet we were asked to give all of our money to the organization, we were told not to communicate with our families or our friends except to share the “knowledge” that we had been given.  Looking back, and at the risk of my friends who still enjoy the community, it certainly was a cult. Just before Neptune moved from Sagittarius into Capricorn and the hard reality of Truth began to prevail, Maharaj Ji closed all of the ashrams, leaving many who had devoted years to the organization and who had no life skills or money to flounder.

There are a lot of wonderful things that came out of this 1970s religious conversion and mystic cults – with them came the spread of yoga, meditation, vegetarianism etc. – all of which are now firmly in the mainstream of our culture.

Nothing in astrological symbolism is good or bad, black or white.  Neptune brings spiritual bliss, but can bring delusion and confusion as well.  I do believe, though, that when we attempt to align with our higher self and ask us to remain in service to the highest good, we will always find our way through and continue to grow in awareness and find that true bliss within.