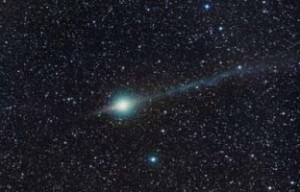 Originally described by Chinese astronomers when it was first seen in July 2007 as an asteroid, a coma was noticed a few days later and Comet Lulin was born. Comet Lulin will be closest to the earth on February 24, according to the latest calculations, and is getting brighter and brighter as it gets closer:

Astronomers at the Taipei Astronomical Museum said that the tail of Lulin will become most vivid during that time as it moves closest to the Earth.According to the museum, it took 28.5 million years for Comet Lulin to revolve round the Sun on its own axis.

In other words, museum astronomers said, the last time Comet Lulin came to the inner part of the solar system, human beings had just evolved from monkeys, the ice caps of the North and South Poles had just formed, the globe’s highest mountain range, the Himalayas, had just appeared upon a ground breaking orogenic movement, and Taiwan was still deep in the sea.

This is pretty incredible and perhaps synchronistic in light of all of the talk in these pages and elsewhere about the rapid evolution and transformation of humans into the next stage of life.

Lulin is creating quite a stir because it is traveling along the ecliptic which is the path that the planets take, but it’s moving in the opposite direction from the planets.  In light of the Blue Star Kachina prophecy that we were discussing a few weeks ago, I wonder if Comet Lulin might step in to take the place of Comet Holmes in the theory that the Blue Star Kachina of the Hopi prophecy is actually a comet.

In ancient times comets were thought to be harbingers of doom because they came seemingly out of nowhere and were different than any other planetary bodies.  In today’s scientific world, most comets have periodic cycles that can be predicted and easily explained.  Here is a comet, however, that defies categorization and explanation.  It is truly a visit from outer space!

Still, let’s not call for the mothership quite yet.  Remember the Shoemaker-Levy comet that plunged into the side of Jupiter?  There was no real lasting effect on earth.  Sometimes a cigar is just a cigar, and sometimes a comet is just an out-of-town guest.