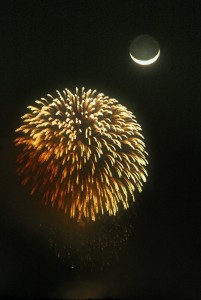 The beginning of 2014 brings us a powerful New Moon in Capricorn, with a Grand Cross in the cardinal (action) signs.  Cardinal signs are initiators – they inspire leadership and movement and are just the thing to motivate the kind of goals and dreams that the New Year tends to foster.

This New Moon is a Supermoon (this term is in common usage today but was actually coined by astrologer Richard Nolle) because it is at its closest point to Earth.  It’s typically the Full Moons that bring about the greatest emotional exposure, but a Super New Moon can open up doors to new changes that are otherwise closed to us.

Capricorn is the sign of achievement and structure – stability, success and the trappings of success. Capricorn is the climber, and driven to produce something that will last.  This New Moon gives us an opportunity to manifest our dreams into the material world.  The Sun, Moon and Mercury are all tightly conjunct, and the presence of Mercury helps to translate our longings into ideas.  The addition of Pluto in the tight formation intensifies the power of Will and if we can focus that Will, magic can happen.

Mars in Libra squares the Capricorn planets, and some frustration or irritation could result.  Jupiter in Cancer is also involved, enlarging and expanding our desires and our need to break away from any shackles we have found ourselves in.  Uranus in Aries completes the Grand Cross, shattering paradigms and providing a window to break free if  we will only open it.  The Uranus/Pluto square is a powerful driver here, but now we have a team of other planets helping to facilitate the process of breakdown and regeneration.

We also have retrograde Venus in the mix, repairing broken promises and reconnecting ties that have been broken.  The cardinal Grand Cross inspires action, but retrograde Venus encourages us to look back to be sure nothing and no one is left behind.

If ever there was a time to venture beyond your comfort zone and try something new, this is that time.  Between now and April when the Grand Cross repeats itself, we have a portal of awakening.  Now is when the rebuilding of our lives can take place – we have let go of so much and surrendered to the process of creation.  Now we become the creators.