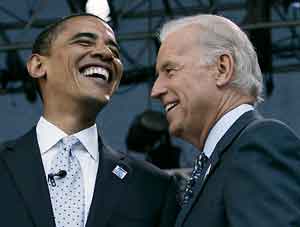 I have to insert a disclaimer here:  I have been a huge fan of Joe Biden since he ran back in the ’90s, but I’ll attempt to be as neutral as possible under the extremely exciting circumstances.

(Note: There is an 8:30 am birthtime floating around for Joe Biden, but until this is confirmed I have used the noon chart and discount any mention of ascendant and midheaven.)

There are a lot of nearly exact aspects between the charts of these two men, something which often indicates a strong karmic connection.  If I had compared these two charts before, something that I kept meaning to do, I would probably have predicted that they have a destiny together for this reason.

There are a lot of nearly exact aspects between the charts of these two men, something which often indicates a strong karmic connection.  Joe Biden is a Scorpio, with a triple conjunction of Mercury, Sun and Venus all in Scorpio.  Mars is in Scorpio also, but outside of the conjunction.  With Sun conjunct Mercury he is extremely bright, and the strong Scorpio qualities show an individual with a powerful personality.  I would expect that Biden’s ascendant would have a much lighter quality, perhaps Gemini or Sagittarius, that masks the intensity of the Scorpio personality.

These Scorpio planets form a square, or challenging aspect, to Obama’s Leo planets.  Most particularly, Biden’s Mars is in an exact square to Obama’s Sun, which shows that Biden will energize and inspire Obama, but also piss him off.  This can be a very exciting aspect if managed well and if the two have open communication.  It can also show that Biden may tend to want to boss Obama around.

Uranus in Obama’s chart forms a square to Biden’s Mercury/Sun/Venus conjunction, an aspect which denotes an exciting interchange that is full of surprises and new ways of looking at the world.  However, it can also indicate difficulties in aligning their vision to work together as a team.

Still, there is plenty of harmony between their charts in close aspects such as Obama’s Mars (assertive qualities)  in a harmonious aspect (sextile) to Biden’s Mercury (communication), suggesting that Obama will offer Biden the independence to formulate and express his own views in cooperative ventures.  There is a large number of Uranus contacts between the charts, indicating that the pairing is full of new ideas, excitement, fresh energy for change.

Stay tuned for more information on the upcoming election and the candidates.