Osama bin Laden – Out of Hiding?

Osama bin Laden – Out of Hiding? 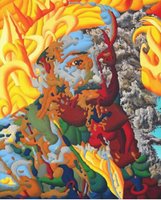 The recent release of an audiotape supposedly from Osama bin Laden brings up many interesting issues and ties in perfectly to the current planetary configuration with Mars opposing Jupiter, both squared by Neptune. Mars, the aggressive urge, is being expanded and aggrandized by Jupiter resulting in aggressive behavior and rhetoric across the globe. Neptune creates a veil of mystery and illusion, perfectly mirroring the disappearance of bin Laden, who threatens an increase (Jupiter) of attacks (Mars) from his hidden and undisclosed location (Neptune).

bin Laden is such an elusive character that even his birthdate is unknown, a source of much frustration among astrologers and rendering suspect any attempt at chart interpretation. The Interpol website gives a date of March 10, 1957, and this is the date most commonly used. However, it has been postulated (see discussion on the Astrodatabank website) that this date results from an incorrect transcription of the 3rd month 10th day from the Islamic calendar to ours. The mystery and illusion that surrounds bin Laden makes him the perfect representative for Neptune, especially as it ties into this configuration with Mars and Jupiter and its proponent for religious (Jupiter) warfare (Mars).

The very issue of his existence is shrouded in mystery. Is he really alive? Many sources reported him dead after the fight at Tora Bora, but then he resurfaced in a videotape in 2004. A journalist reported January 9 that bin Laden died in Iran in December. A terrorism expert in Australia reported that an Indian intelligence officer claimed bin Laden died in April of last year. If he is still alive, why has he not made a videotape? In the days of his full power before September 11, his frequent videotaped appearances created the impression of a man whose ego required constant public expression. And why has Zawahiri produced most of the tapes lately?

The role of Neptune in astrology is to create a yearning within us for an experience of what we often call the “divine.” This is not a religious experience, or a dogmatic philosophy – those fall under the realm of Jupiter. Neptune is the mystic – the gnostic who seeks to “know” and to have a true experience. Neptune is also the artist, the musician, the creative impulse that comes from both within and outside of ourselves. Neptune cycles such as the one we are currently in with Mars and Jupiter create confusion and illusion, but they also impel us in the midst of that confusion to seek an experience of something more real and more true than our day to day reality.

It’s unlikely that this mystery will be solved any time soon.