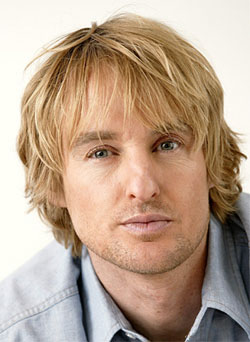 You can tell Owen Wilson is unusual the first time you see him in a film. Shaggy hair, crooked nose: he doesn’t look like your everyday film star. And even though the parts he plays are typically the sophomoric doofus, his presence lingers and suggests a deeper and more complex character lies beneath. His astrological chart suggests that the same is true for Wilson himself. Recent gossip reports have suggested that Kate Hudson has left her husband for a romance with Owen Wilson, so I looked into their charts for the National Ledger entertainment column.

Owen Wilson has the Sun in Scorpio, along with three other planets (Neptune, Mercury and the Moon), giving him an exceptionally strong intensity and passion in everything he does. Scorpio is a fiery water sign that is anchored in the realm of the emotional underworld; the dark and deep underbelly of our feelings that others may fear to witness. There is a great deal of courage in the Scorpio personality, since they are the ones willing to face their inner demons and become transformed by them. This doesn’t sound like the Owen Wilson that we see in films, but this is due to the fact that it is actually the sign that is rising in the chart, the ascendant or rising sign, that describes the outward personality. The rising sign is determined by the time of birth, and this is rarely available for celebrities so all we can do is make a guess, and in Wilson’s case I would guess his rising sign to be something fiery such as Leo or Sagittarius. Wilson himself has said that he is surprised he ended up in comedy, because he was so serious in high school.However, the inner Owen Wilson is strongly Scorpio.

Scorpios have a reputation for being sexy, and it’s true that there is a strongly sexual component to their nature, but they are much more. They can be intensely secretive with a strong need to be in control of their relationships, and typically become consumed by their relationships and everything else they do because of their intensity. They dislike the superficial and probe beneath the surface in order to discover what lies beneath. Even under Owen Wilson’s silliest characters there is a depth that surprises you.

Wilson’s chart is made more complex with the addition of three planets in Libra, the sign of relationships (Mars, Uranus and Jupiter). Partnerships are very important to him with this strong Libra emphasis, but the combination of Mars and Uranus can be problematic. Mars is our aggressive urge and Uranus shows where we are rebellious and dislike convention, and this is a combination that is exciting and energetic but also dislikes restrictions. Wilson enjoys living alone and when in a relationship with a woman he fears the restrictions that a commitment will require. When Wilson broke up with singer Sheryl Crow, his last serious relationship, he said that his lack of “focus” (read commitment) was the cause of the failure of all of his relationships. His most recent publicized relationship was with a Hollywood stripper which ended with Wilson feeling trapped. This need for freedom and autonomy conflicts with Wilson’s intensely passionate nature, and creates within him a conflict over commitment.

Kate Hudson is an Aries, the sign of initiation and will. Aries people tend to be headstrong and courageous, and typically see the best in people. Kate’s Mercury (communication) and Mars (desire) is also in Aries, intensifying her fiery and independent nature. However, she is also a romantic with with Venus (relationships) in sensitive Pisces. The planet Neptune, the planet of dreams and illusion, makes a challenging aspect (square) to Kate’s Venus. This combination often shows someone to whom the fantasy of love may be more real than the actual experience, and with her strong Aries nature she prefers to see the best in the situation rather than what might be under the surface.

Kate and Owen met in the romanticized world of a film set and in the thrill of an illicit relationship. Both of them thrive on excitement, so this is no doubt an intoxicated time for them. But do they have what it takes to go the distance? Mars shows sexual compatibility, and Owen’s Venus connects with Kate’s Venus, showing a strong love connection as well. These are all very positive for a loving relationship. They could have difficulties in communication, however; Kate’s Mercury is in headstrong and willful Aries which tends to be combative and needs to win; Owen’s Mercury is in Scorpio, which needs to be in control and holds a grudge. They will need to make a special effort to understand each other and listen to what is said below the surface.

The relationship the planets make from one person’s chart to other tells us how each person perceives the other, and overall the planets of these two work well together. However, like all relationships (even the most successful ones) there are some potential difficulties here. Pluto in Kate’s chart makes a square to Venus in Owen’s chart showing a powerful (Pluto) connection (Venus), but one where Owen may feel overpowered by Kate. Saturn (commitment) in Owen’s chart is opposite Uranus (freedom) in Kate’s chart, showing that Owen is likely to be the one here that wants the commitment, which Kate may run from.

Many of us have conflicts over commitment that are shown in the birthchart when there is both a need for connection, such as the strong Scorpio nature, with a craving for autonomy such as the Mars/Uranus/Jupiter combination. When these urges collide, we tend to swing from one extreme to another until we achieve the balance of integrating both within ourselves. It’s not unusual for an individual with this sort of conflict to be the pursuer in one relationship and the one who flees in the next.

A relationship like the one between Owen and Kate can succeed as long as both partners recognize their inner need for autonomy within the relationship. Owen’s Scorpio nature is more likely than Kate to crave a passionate love affair; Kate is romantic and craves excitement but with her strong Aries nature she isn’t wired for the kind of intensity that Owen is likely to offer and in time she may become easily overwhelmed by his emotions. It’s also possible that once the newness of the love affair has worn off and the day-to-day reality begins that Kate will no longer find what she is looking for here. But the astrology for these two is positive overall, and only time will tell if they can work through their internal issues and achieve happiness together.