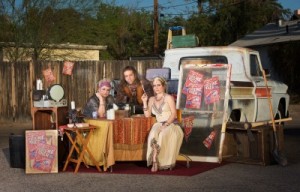 Many cities and towns have old laws on the books against “fortune-telling,” but they are rarely if ever exercised. Now Philadelphia has taken a giant step backwards by “closing storefront psychics, astrologers, phrenologists and tarot-card readers who charge money for their services.”

I don’t know how a storefront psychic is different than one who works over the phone, and there is no disputing that there are a lot of charlatans and scam artists out there as there are in any business. We can see in television programming of shows such as Medium that psychic awareness is becoming more accepted in the mainstream, but these archaic laws remain on the books.

In response, the Ancient Arts Freedom Association held a peaceful demonstration in downtown Asheville in which about 50 participants practiced various forms of divination. Police, rather than arresting everyone, issued a citation to just one participant (a tarot reader). Appearing in court with her ACLU lawyer, she hoped to be declared guilty so that she could appeal the decision to a higher court and have the law erased from the books. Instead, the judge declared the Asheville law to be unconstitutional. Unfortunately, however, this decision was not binding on other North Carolina jurisdictions.

It makes sense that this issue would arise again as Saturn opposes Neptune. While I decry the scam artists that pose as psychics to bilk people of their money, I hate to see the state taking any more control of personal wellness issues. With the mental health system across the country being in a shambles, people need all the help they can get.