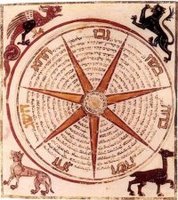 I write a monthly planetary update column called Skywatch, and as I worked tonight on the column for June (which is a power packed month!) I felt it was important to lay the groundwork by summarizing the powerful influences that we have experienced over the past year, which are still in effect and calling us to the dance.

2006 has been an intense year so far, with planetary dances creating a cycle that alternates between a building of tension through the hard aspects: squares (between Jupiter and Neptune and between Jupiter and Saturn) and oppositions (Saturn to Chiron); and an opening of the doors of consciousness and awareness through the flowing aspect of the trine (Uranus and Jupiter):

The current square cycle between Jupiter in Scorpio (expansion and possibilities, particularly in the realms of emotional connection, other people’s money (including the stock market), sexuality and death) and Saturn in Leo (contraction and disappointment, the downfall of mundane rulers, the need to dissolve the personal ego) began in December of 2005 and will make the second hit this month (June 2006), concluding the cycle in late October of this year.

The square cycle between Jupiter (expansion, theology and faith) to Neptune in Aquarius (delusion, confusion, becoming lost in fantasy, problems of energy imbalance and spiritual emergency) began in late January of 2006, hit for the second time in March of 2006, and concludes in late September of this year.

This phase of the opposition cycle between Saturn in Leo (painful ego dissolution and the discipline required to shine without ego) and Chiron in Aquarius (wounding and healing requiring an adjustment of the inner energy force) actually began in 2003 and made seven contacts since September of that year. The conclusion of this cycles takes place this month (June 20).

The trine of Uranus in Pisces (mystical revolution, the awakening of conscious through that which is unknowable) and Jupiter in Scorpio began at the end of November in 2005, hit for the second time in May of 2006, and will complete its passage in late August/early September of 2006.

The past year has seen a great deal of violence all over the world, as issues of religion and philosophy face off in conflicts of ideology and culture. Yet at the same time, there has been an awakening of awareness across the globe, and a dawning of a consciousness that spans the cultural divides. The opposition of Saturn to Chiron I feel is particularly strong, especially since it has taken place 27 times since 1986, with 20 contacts between 1986 and 1994 (see table. The opposition of Saturn to Chiron has brought about a “healing crisis” that has forced (Saturn) an awareness of the pain and misery (Chiron) that is suffered in some cultures, which by necessity has resulted in increased communication and efforts by the global community to heal (Chiron) those wounds which are now forced into global consciousness.

The beginning of the current Chiron/Saturn cycle (in 1986) saw the nuclear accident at the Chernobyl plant, which arguably ended the first nuclear age. The oppositions of Chiron to Saturn during the late 1980s witnessed the massive casualties of the war between Iran and Iraq which one could argue were the beginnings of the current debacle in Iraq. This first Chiron/Saturn phase also witnessed the stock market crash of 1987, the largest stock market drop in history. This crash resulted in a major recession that lasted for several years.

The beginning of this Saturn/Chiron cycle also witnessed the birth of the Oprah Winfrey show, which arguably has done more to aid the self-help movement than any other single event. The self-help movement is perfectly characterized by a detailed self-examination (Saturn) which results in the healing of old wounds (Chiron) for greater wisdom and empowerment. It will come as no surprise to most of you that I revere Oprah for the work she has done to bring the work of personal transformation to the general public.

Because Jupiter is the keynote speaker of the other cycles, it is useful to really take a look at what Jupiter means astrologically. Jupiter is said to rule the sign of Sagittarius, and because Pluto is traveling through the tail end of Sagittarius the issues of Jupiter are in the process of being transformed by Pluto. Jupiter is said to be the “greater benefic,” and bestows good fortune and positive thinking. Jupiter is the principle that positive thoughts reap positive outcomes, and tends to be optimistic and expansive, ready to take advantage of all opportunities. Jupiter, of course, was King of the Gods, and as such he was the ruler of all and created his own laws. Jupiter is associated with law, theology, and our search for the meaning of life. Often this finds us in the realm of religion, which is the sharing of personal ideals with others. Jupiter represents blind faith – it also can show where we may find ourselves bigger than we actually are in life. It also rules expansion, and tends to bring an exaggerated manifestation of planets with which it comes into contact.

The current cycle of Jupiter transits throughout the year are creating opportunities and expanding awareness, but the danger with Jupiter is that like a balloon that becomes too full of air, our confidence could pop and the air could drain out of the lives we have built. The confidence of Jupiter creates debt, it expands the housing and stock market, it can create an illusion that things are better than they actually are. On the other hand, Jupiter opens us to fresh possibilities that we haven’t before noticed.

We are experiencing simultaneously the trine of Uranus and Jupiter, which opens our awareness (Jupiter) to new ways of thinking (Uranus) and creativity of which we were previously unaware. However, the square of Jupiter to Neptune brings in the possibility of deception (Neptune) and an overblown sense of our own abilities (Jupiter).

The Jupiter/Saturn square cycle deals with our ability to balance an openness of mind and optimistic viewpoint (Jupiter) with our ability to be practical and reasonable and be aware of our limitations (Saturn). Often the square aspect between these two planets creates expansive periods (Jupiter) that are followed shortly by a heavy dose of reality (Saturn).

Each of these planetary cycles is a powerful combination that is working to transform our own sense of our world view (Jupiter). The key to successfully managing these planetary cycles is to stay open (Jupiter) to new possibilities, be prepared to radically change your thinking (Uranus), keep you feet planted firmly on the ground and work hard (Saturn), while following the call of your inner self to realize that there is more to life than this mundane reality (Neptune).