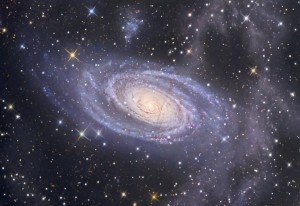 On May 10 the square of Jupiter to Uranus reaches the apex of the second phase of its cycle. Jupiter expands and exaggerates the urge for Uranus to create radical change and break down the status quo, and we’ve seen this since the cycle began back in January. On a global level this planetary configuration stimulates conflicts between religious and ethnic groups, and on an individual level the effect may be more subtle. Suddenly we feel dissatisfied and impatient with those with whom we agreed last year. We want new ways of looking at the world, we want to live our lives in a different way that more authentically fulfills the person we think we are NOW.

Jupiter right now is softening the challenge of the Saturn/Neptune opposition by adding an expansive quality of optimism and faith. Saturn, the force of discipline and restriction, is still trine to Jupiter, lending a stabilizing force to our desire for expansion that Jupiter/Uranus evokes. Saturn says “make sure you’ve packed your lunch before you go on that interdimensional journey.”

In addition Neptune, the force that urges us to dissolve our material reality and reach for an experience of the divine, makes a sextile to Jupiter which adds a note of creativity and pulls together our spirituality (Neptune) and our personal theology (Jupiter). The interplay between the Jupiter/Uranus square and the Saturn/Neptune opposition offers a relatively stable environment where change and growth can take place in a more organic way.

This cycle continues through October but is most pressing now, particularly with the addition of Mars which is approaching a square to Pluto (exact May 13) where it brings up power conflicts and other battles of the ego. The square from Mars to Pluto will be particularly challenging for those of us with planets at the last degrees of the mutable signs (Sagittarius, Virgo, Pisces, Gemini).

Mercury enters Gemini on the 11th, quickening our minds and increasing our curiosity and our attention to the world around us. As Mars reaches the exact square to Pluto on May 13 we could find ourselves in a battle of wills that plays out verbally rather than physically as Mercury in Gemini accentuates the field of communication. This is Mother’s Day, so watch for old power conflicts with Mom to surface!

As with any difficult Mars event, the energy of a battle between Mars and Pluto can be difficult to handle. Vigorous physical exercise is a good way to release excess energy but we will also need to give expression to anger over issues where our needs (Mars) are not being met or being blocked (Pluto). Mars is still in Pisces at this time where it tends to operate in ways that are more hidden or passive-aggressive. When Mars enters Aries on May 15 these issues become a little easier to deal with as they move out into the open. Mars in Aries relishes a good battle and isn’t afraid of confrontation.