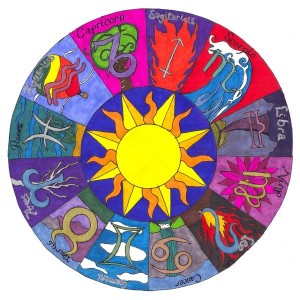 This week is packed with planetary juju leading up to the eclipse.  A harmonious sextile from Mars to Saturn and Pluto is just behind us but the energies of calm and powerful strength still linger to offer a strong foundation from which we can create.  With the Sun having moved into Capricorn at the Solstice, we now have a stellium of four planets in grounded Capricorn and most of the planets bundled together forming a powerful concentration and focus between Scorpio and Aquarius.

Stelliums and bundles are typically more powerful than a scattered assortment of planets, each of which has a different purpose and concern.  It can be easy to limit our scope and perspective, and therefore difficult to open our minds to new possibilities.  Fortunately, the eclipse at the New Moon on December 25/26 (depending on your location) bursts open a sense of unlimited potential with a conjunction to expansive Jupiter and a trine to innovative Uranus.  Under this influence we can shake off our old ideas about our lives and our limitations, and find ourselves faced with new opportunities which previously we may not have even considered.

As the Sun and Jupiter move closer to the South Node of Fate, any lingering old patterns from the past are likely to be illuminated.  During the eclipse window, between December 22 and December 30 when the exact alignment between the Sun and the South Node occurs, these old patterns and behaviors are likely to be unmasked.  This sounds scary but it’s actually a good thing – when the devils that plague us are unmasked we can more easily let them go.  During the eclipse window, Mercury (mind and communication) will move into Capricorn and further intensify that grounded practicality to inspire us to create strong structures that will serve us long into the future.