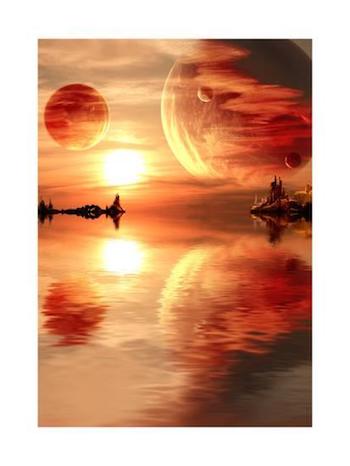 Art by Frenta.  Neptune turns retrograde today and will remain in retrograde motion until November 24th this year.  Neptune (and the other two outer planets) are retrograde for half the year every year, so it’s not a huge deal as planetary cycles go.  Still, for the next few weeks while Neptune is gradually picking up speed in its retrograde turn its influence will be stronger and if Neptune is already hitting a sensitive point in your chart you may find its influence more powerful. Neptune can enhance spirituality and imagination; it can also induce confusion and fantasy.

This could be exacerbated by retrograde Mars which can bring unsettled issues out into the open where they need to be dealt with. Under this combination of retrogrades, more attention to the inner workings of the psyche will be helpful so that we can maintain some clarity over the next few weeks.

Fortunately between the 18th and 20th we have two harmonious Mercury aspects which will help us to do just that as the mind becomes clear and better able to find focus.  The 21st through the 23rd will be a bit more challenging, with potential for conflict especially on the 23rd.

Don’t be surprised right now if you feel overwhelmed by uncertainty.  It’s simply a normal part of the ebb and flow of life – turn within to see where you can make adaptations to help facilitate greater clarity and all will be well.