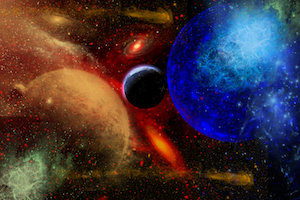 Deviant Art.  Jupiter’s expansive beneficence (is that a word??)  has been intertwined in a couple of lovely dances this summer with Neptune (culminating August 8 2018) and with Pluto (culminating September 12 2018).  These are the final interactions in a series that began in December with Jupiter trine Neptune and in January with Jupiter sextile Pluto.

The outer planets are transformational forces – unlike the visible personal planets which address personality factors and tendencies, the transformational planets inspire personal evolution and sometimes bring about events in our lives which unfold into a dramatic change of some kind. While Jupiter’s influence tends to be personal – it can bring about good luck and good fortune and instill confidence and optimism.  When harmonizing in a trine with Neptune, the planet of transcendence and creative imagination, Jupiter facilitates the flow of consciousness expansion and increased awareness

Where trines are easy and flowing aspects that bring harmony between planets, sextiles are more dynamic and add a little excitement. In sextile to Pluto, Jupiter acts as a guide to help us into Pluto’s Underworld where the great treasures can be found – not only the treasures of the psyche and the magic of the great philosophical mysteries, but also the very keys to unlocking the mystery of Self Knowledge.

But all is not rosy in the planetary sphere – a challenging square between Saturn (tests and hardship)  and Chiron (emotional wounds which require release) which was in play in 2017 has returned to align within a degree.  Square aspects between planets often motivate some sort of crisis in order to achieve resolution, but when the aspect is super close like this one but doesn’t ever quite align, there may just be an unsettled feeling of anxiety or emotional crisis that never comes to a head.  This may have something to do with events that occurred during the official cycle in 2017.  This unsettled square is as close as it will get right now (September 10, 2018).

Last but not least, Mars (aggressive force) will move back into Aquarius.  Mars first entered Aquarius back in June but then retrograded back into Capricorn and returns now to Aquarius.  In Aquarius, the assertive energy of Mars is filtered through the brilliant reason of Aquarius.  While Mars is in Aquarius (through November 15th) it’s more difficult to be grounded in the body so pursuing physical activities can be very helpful.  But this is an excellent time for anything creative that requires intellectual agility and imagination.