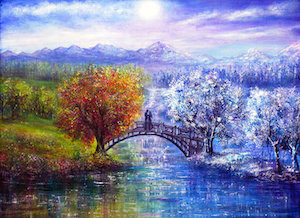 Jupiter will be in Scorpio for about a year, and you can read more about that cycle here,  In its role as King of the Gods, Jupiter brings a higher awareness to the energies of the sign through which it moves, and in Scorpio Jupiter seeks a broader awareness and higher expression of power, emotional intensity, sexuality, and shared finance such as taxes and financial markets. But Jupiter is also known for excessive confidence and complacency, such as we saw in 2005-06 when Jupiter was last in Scorpio and presided over the expansion of the housing market.  Scorpio is also associated with secrets and mysteries, and Jupiter’s travels through Scorpio often bring up new revelations from the mists of time.

While Jupiter is in Scorpio (until November 8, 2018) it will be difficult to hide from our shadow Self.  That may sound negative and it CAN be dysfunctional if we become stuck in the shadow rather than face the darkness and find our way to the light. True empowerment lies in facing our inner Truth and mining it for all of the riches that are found there.

Venus moves more quickly and changes signs every 23 days or so except during its retrograde phases. The influence of Venus is not very powerful and we tend not to notice it as much, but the transition from the modesty and concern for details of Venus in Virgo to the focus on balance and harmony of Venus in Libra on the 14th of October will tend to create more ease and flow in our relationships and in the rest of our lives as well.

The Libra influence is pronounced over the next few days since both the Sun and Mercury are in Libra, and the New Moon on October 19th is in Libra.  Under the canopy of Libra’s light we find ourselves more sensitive to dissonance and disharmony in the world.  Diplomacy and tact, our love of beauty and attention to aesthetics – all of these things will become more important over the next week and until the completion of the New Moon.