Pluto prepares to retrograde and another earthquake

Pluto prepares to retrograde and another earthquake 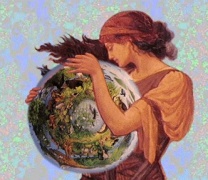 A 7.2 magnitude earthquake struck Mexico and California yesterday, a force equivalent to the earthquake that struck Haiti earlier this year.  This quake occurred right on schedule according to astrologer Richard Nolle who predicted an upsurge in seismic activity during the March 27-April 5 time period around the Libra Full Moon.  Richard has long written that when the Moon is at perigee (closest to the earth) her influence is more powerful and more likely to induce seismic activity and we have certainly seen that over the last couple of months.

In other news, Pluto has slowed down to a standstill in preparation for its retrograde turn on April 6th.  When a planet changes direction it tends to have a more powerful influence, and because Pluto’s domain includes issues of power and secrets, expect over the next few months to see revelations of secrets that have long been buried such as the acceleration of victims of sexual abuse by priests coming forward over the past weeks.

Because Pluto is in Capricorn, where it is restructuring the foundations of our societies, we are likely to see some reversals in decisions that have occurred since November when Pluto was last retrograde, especially in the banking industry and in governments around the world.  I have long suspected that in Capricorn, the sign representing the solid foundations on which we build our lives, Pluto would bring earthquakes and other kinds of earth changes, and this seems to be occurring as I suspected.

In our personal lives we will be asked once again to eliminate anything that no longer serves us.  Pluto spends nearly six months retrograde out of every year, and these are often periods of self-examination and personal transformation. This is a great time for housecleaning of all kinds:  Clearing out the debris of our lives that we have been hanging on to “just in case” – from our closets, and from our psyche.

Pluto is also associated with warfare of the nuclear type – conflict that is so extreme that it creates permanent transformation.  It is not uncommon to see an escalation of violence when Pluto stations (slows down to a standstill) before a change of direction, and we have certainly seen that over the weekend.  Suicide bombings in Baghdad, in Russia, attacks in Pakistan, threats against governors in the US  – expect to see this kind of thing continue over the next few days.  Pluto is not violence for the sake of violence alone, but to expose fissures that need attention.

If Pluto is transiting our own chart right now this will feel somewhat intense.  Just remember that Pluto’s job is to teach the nature of power, and to force us to look at the unpleasant things we usually try to avoid.  If you experience this, just assemble your courage and investigate.  The rewards of doing so will be well worth the stress!