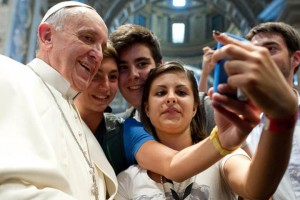 As you know if you’ve been reading the astrological news in the past few years, we are now in the waning phase of a square aspect (90 degrees) between Uranus and Pluto.  You can read more about this phase in the sidebar of this blog if this concept is new to you, and you may want to catch up on this post about the Uranus/Pluto square from last year detailing the news events that correlate with this cycle.

One such event was the resignation of Pope Benedict in 2013.  Not only was he the first pope to resign since 1415, he was replaced by Pope Francis who himself is a walking representative of the square between Uranus in Aries (individual liberty and personal revolution) and Pluto in Capricorn (the breakdown of the structures upon which our society is built).  Benedict was a traditionalist and saw homosexuality as an “intrinsic moral evil.”  He was a strict doctrinarian and resisted any kind of liberal reform, thereby representing the Capricorn adherence to the structures of traditional morals and rules.  He insulted Islam, promoted a holocaust-denying bishop, and equated the ordination of women with sexual abuse.

Long ago as I looked ahead to the entry of Pluto into Capricorn I predicted the destruction of huge regulatory bodies such as the Catholic Church and while that has not come to pass I think it’s safe to say that the Church has been weakened by scandal and generally by the changes in the human experience that have come about over the past few years.

There is no doubt that Pope Francis is revolutionizing the Church.  Uranus is the planet of radical change and in Aries, the sign of the warrior, there is an aggressive urge to destroy the status quo and replace it with a more anarchic independence and personal freedom.  Since taking office Pope Francis has:

A Cardinal of the Church, Cardinal Kasper, recently called Pope Francis a radical, saying: “the pope’s view is that “the churches are too wrapped up in their own concerns. … The church cannot be self-centered, revolving around itself, but a church on the move,” at the center of human existence, not the periphery.”  Here we clearly see the work of Uranus in Aries – seeking a more humanitarian (Uranus) concern for the rights of individuals (Aries).

As we head into the SIXTH of seven exact alignments between these two planets, expect even more controversy as the old ways continue to deconstruct and new ways of living in the world rush in to fill the vacuum.