Power to the (Working) People!!

Power to the (Working) People!! 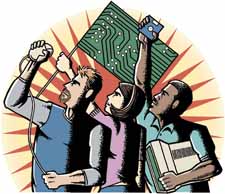 Ray Merriman has a new article up about Saturn in Virgo and the Saturn/Uranus opposition. Ray writes:

Saturn in Virgo … relates to the growing frustration of those who do the work – the working class, the middle class. They look around and they see that they do all this work. Yet when the business fails, it is they who suffer, not the management that made the decisions that led to the failure. The workers are the ones who lose their jobs or give up benefits. And oftentimes when those in management make these failed decisions, they leave the company and receive huge financial bonuses, known as “Golden Parachutes.” And even while they are there, if the company prospers, it is these decision-makers who also receive huge end-of-year bonuses – at least huge in comparison to the much smaller bonuses given to those who did the hands-on work. It is not that these conditions have not existed forever between management and labor, between the wealthy and the middle class. It is just that now, in the first decade of this new century, the rate of growth and rewards between management and the work force has widened to its largest distortion ever.

I might add that it is largely the Pluto in Virgo generation that is suffering at the hands of the power elite, and I think it’s also noteworthy that this executive compensation issue went to the extreme under Saturn’s ride through Leo, the sign of ego and kingship.

Ray believes that the opposition from Uranus to Saturn will lead to an uprising (Uranus) of the working people against the power structures (Saturn).  I would like to think that’s true, but I don’t believe we will get to that point until Uranus enters Aries in 2011 and the force of resistance and change (Uranus) is energized by the fiery Aries energy.  People are floundering now under Uranus in Pisces, looking for the peaceful way (Pisces) to revolt (Uranus).

They have plenty to strike over though, Americans have lost trillions of retirement dollars thanks to the reckless activities of our banks, which our government has just bailed out for hundreds of billions of dollars.  It looks like they didn’t need the money, though:

Despite the Wall Street meltdown, the nation’s biggest banks are preparing to pay their workers as much as last year or more, including bonuses tied to personal and company performance.

So far this year, nine of the largest U.S. banks, including some that have cut thousands of jobs, have seen total costs for salaries, benefits and bonuses grow by an average of 3 percent from a year ago, according to an Associated Press review.
“Taxpayers have lost their life savings, and now they are being asked to bail out corporations,” New York Attorney General Andrew Cuomo said of the AP findings. “It’s adding insult to injury to continue to pay outsized bonuses and exorbitant compensation.”

When Barack Obama says it’s time to spread the wealth around, he means give it back to the people from whom it was stolen. Unfortunately, it’s those very same people that are reacting with such fear to the idea, calling it socialism.  With the opposition from Saturn to Uranus, new ideas and change (Uranus) will become even more frightening for those who cling to the past (Saturn).