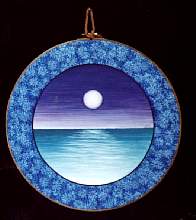 And all the night’s magic seems to whisper and hush. And all the soft moonlight seems to shine in your blush.
— Van Morrison, “Moondance”

Full Moons occur when the solar conscious principle of the Sun opposes the instinctive lunar principle of the Moon. For thousands of years, humans have been mystified by full moons, attributing to them great power. Although there are studies on both sides of the aisle, there are several scientific studies demonstrating an increased murder rate at the full moon. Hospital workers tell us that more babies are born during the full moon. Police say that they get more family violence calls.

The tension of the Grand Cross of December is moving away, but several of the planets involved are still caught in the dance. Mars (aggression, warfare) is moving away from a square to Saturn (discipline, leadership) and into an opposition with Jupiter (philosophy, overconfidence). (for more information on this powerful configuration you may want to read some of these articles). Difficult Mars/Jupiter aspects tend to create an atmosphere of arrogance and self-righteousness as Jupiter’s confidence creates a tension with the aggressive Mars energies. Watch for bombastic talk from people in the news, and in our personal lives we may find ourselves drawn into arguments over philosophy and religion as Mars approaches the exact opposition with Jupiter on January 14th.

Misty Neptune is drawn into this game as well and begins to confuse the issues. Neptune encourages self-sacrifice and martyrdom, and this could be a time where suicide attacks increase as the urge for martyrdom collides with religious arrogance, culminating on January 16 when Mars squares Neptune exactly and Jupiter is within one degree. In the middle of this falls the Full Moon in Cancer on January 14 at 4:47 am EST, personalizing the tension of the Mars/Neptune/Jupiter configuration. With the Moon in nurturing Cancer opposing the Capricorn Sun, there may be some tension between home life (Cancer) and career motivations (Capricorn). Cancer longs to stay close to home, and Capricorn works hard for public recognition.

This Full Moon makes no aspect to the other planets, showing that it will have a powerful effect this month, unhampered by other influences. Because Cancer is ruled by the Moon itself, this is likely to be a time of emotional flux, moodiness, and challenging dynamics in the home. Taking extra care to nourish and nurture family members during this time will help to bring out the best of this time.