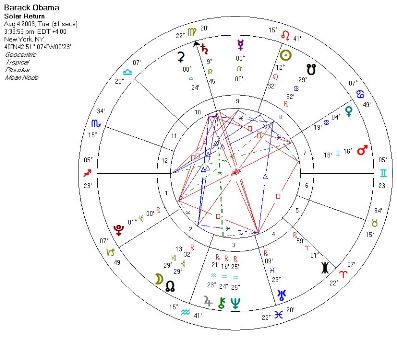 The only aspect to the Sun is a harmonious sextile from Mars that suggests that he will have a degree of success in achieving this.  Mars provides energy and passion to get things done, and Mars in the SR chart is in Gemini where much is achieved through discussion and the transmission of ideas.  That Mars is in the Seventh House of marriage and partnerships, so I suspect there will be fair amount of conflict in the White House and not just with Michelle.  If I were a predicting sort of astrologer I would predict that Obama becomes more independent (Mars) from the partnerships that he has made in his first year in office, particularly Rahm Emanuel and Lawrence Summers.  That Seventh House Mars is a team player mostly when the team is on his side.

Sagittarius is rising in the Solar Return chart, so optimism and faith will continue to be a big part of his message.  However, the Moon is in the last degree of Capricorn and it tightly conjoins the North Node, suggesting an almost desperate (last degree) effort to put the new structures (Capricorn) in motion that will support Obama’s sense of his destiny (North Node).

Saturn, the Celestial Taskmaster, sits prominently on the Virgo Midheaven of the Solar Return chart, revealing that either (a) the amount of work that Obama has to do this year will be overwhelming and he will be crushed under the pressure, or (b) Obama will persist and apply the creative power of discipline and hard work and will be fantastically successful in his endeavors.

The big challenge in this chart is the opposition of Pluto to Venus in Cancer in the Solar Return chart that echoes the square of transiting Pluto to Venus in the natal chart.  This astrological double whammy does not bode well for partnerships of any kind.  When Pluto hit Obama’s Venus for the first round his association with his pastor Jeremiah Wright came to an end.  Pluto rules nuclear power and destruction that precedes rebirth, and in connection with Venus it has a tendency to blow up relationships, particularly if they have outlived their purpose.  This will be an interesting year from that perspective.

The transits and progressions for the next year are fairly positive for President Obama.  He has numerous Jupiter transits which tend to bring luck and good fortune, particularly the continuing transit of Jupiter over the Ascendant of his natal chart (personal identity) which began in April.  This bodes well for his confidence and ability to inspire confidence and others which is critical in a leader.

Saturn trines his natal Saturn in September which is another portent of success that rewards hard work, but it will then go on to conjunct the Sun in his progressed chart, revealing that challenges await in October.  November will be particularly difficult for him as Saturn becomes locked in a square to Pluto that aspects Venus in the natal chart.  This again suggests shakeups in partnerships of all kinds.  Watch for changes in the White House staff as a result.

All in all though, it looks like a fairly positive year for Obama and while there are some stressful planetary cycles, the large number of Jupiter events should carry him through with a strong degree of success.

Update: 8/5 am. I’m on vacation and missed the publication of a supposed Kenyan birth certificate for Obama that was just released before the Full Moon minor eclipse today.  The Full Moon opposes Obama’s Sun, so the timing of this is interesting.  This website has an interesting discussion on the various points surrounding the Kenyan birth certificate.