The question of cusps and the 29th degree

The question of cusps and the 29th degree 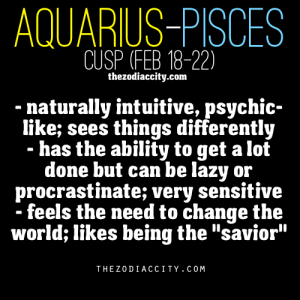 In response to a few questions I had from readers after other astrologers wrote about the New Moon being in Pisces, I thought it would be useful to discuss the idea of the “cusp.”  This is one of those concepts about which you can read a myriad of different opinions from very reputable astrologers.

The cusp idea comes mainly from the popular world of “sun sign astrology.”  Since the Sun doesn’t move from one sign to another on the same day every year in order to give readers an idea of which sign their birthdate fell in there was a need to find a way to describe those few days in which there could be some leeway between one sign or another as you can see in this image which put the cusp between Aquarius and Pisces as being between the 18th and 22nd of February.  For example, the Sun moved into Pisces last night right after the New Moon at 29 degrees Aquarius, the 18th of February.  But in 2012, the Sun moved into Pisces on the 19th of February.  Still, in the past 80 years the Sun has not moved into Pisces later than the 19th, so the idea that the Pisces cusp extends to the 22nd is not really valid.

Popular astrology columns often say that if you were born “on the cusp,” meaning in the few days before or after the day the Sun changed signs, that you have a dual influence as shown by the illustration above.  Astrologers reading birthcharts often extend the cusp idea to the nature of other planets and points, including the Ascendant and Midheaven angles.

What I have come to see in reading many charts over the years is that the last few degrees of a sign will start to bleed into the next sign.  I believe that this occurs because each sign reacts to and corrects the previous sign, so there is a sense of forward movement through the zodiac.  However, once the Sun or any other planet or point has moved into the next sign it resides fully in that sign and expresses fully the energies of that sign.  For example, Mars at the 27-29th degree of Aquarius will express the Aquarian attributes of detachment and fairness, but it will also begin to learn to surrender the Aquarian need to control and experience more of the Piscean trust and faith in divine wisdom.  In my experience this movement from the last degree of a sign into the next occurs with age and experience.

I see that many recent posts were calling this the New Moon in Aquarius/Pisces because of this cusp issue, and certainly the movement from Aquarius to Pisces was present as I wrote in my post.  However, the symbology of the 29th degree of Aquarius should not be lost as we blur the boundaries between the signs.  The 29th degree, sometimes called the “critical” or “anaretic” degree, is associated with the endings of cycles and new beginnings.  The word “anaretic” derives from “anareta,” which in medieval astrology signified the planet of death in the natal horoscope.  This is likely what has given the 29th degree such a bad rap in traditional astrology, although endings are actually the harbinger of new beginnings and not to be feared.

I love this symbology of the endings of the 29th degree combined with the New Moon.  There is a sense of sweeping away of the old and a fresh new beginning.  In any case there are now six planets and luminaries in the sign of Pisces, which makes this a time for creativity and spirituality and learning to find the flow, so in the end the Pisces influence is an important one after all.